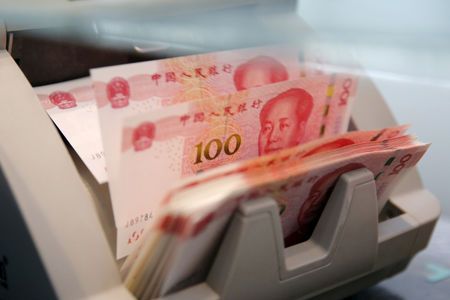 SHANGHAI -- China’s central bank on Wednesday made its biggest daily net cash injection via reverse repo operations on record, more evidence that authorities are shifting to policy easing to counter a slowdown in the world’s second largest economy.

The People’s Bank of China said the injection was to maintain “reasonably ample” liquidity in the banking system.

It attributed the generous liquidity support to the current peak period for tax payments, adding that “the banking system’s overall liquidity is falling rapidly”, according to a statement on its website.

On a net basis, the PBOC injected a net 560 billion yuan ($82.73 billion) for the day, as 10 billion yuan reverse repos are set to mature on Wednesday.

December’s “abysmal” trade data and manufacturing contraction have “translated to a consensus by authorities that the economy needs more decided support and today’s large injection reflects that,” said Trinh Nguyen, senior economist for emerging Asia at Natixis in Hong Kong.

“The news is clear - the economy needs help,” she added.

On Tuesday, Chinese officials signalled that they will roll out more stimulus measures in the near-term, after the shock contraction in December exports and imports reported on Monday raised fears the economy was cooling more quickly than expected.

Ming Ming, head of fixed income research at CITIC Securities in Beijing, said the fund injection was to counter seasonal factors including tax payments and rising cash demand for the Lunar New Year holiday, which comes in early February this year.

On Jan. 4, the PBOC said it was cutting the amount of cash that banks have to hold as reserves for the fifth time in a year, freeing up $116 billion for new lending in a two-stage cut to banks’ reserve requirements.

On Tuesday, China said that its banks extended far more new loans in December than expected, bringing last year’s tally to a record $2.4 trillion as Beijing scrambles to help cash-starved companies and ease mounting pressure on the weakening economy.