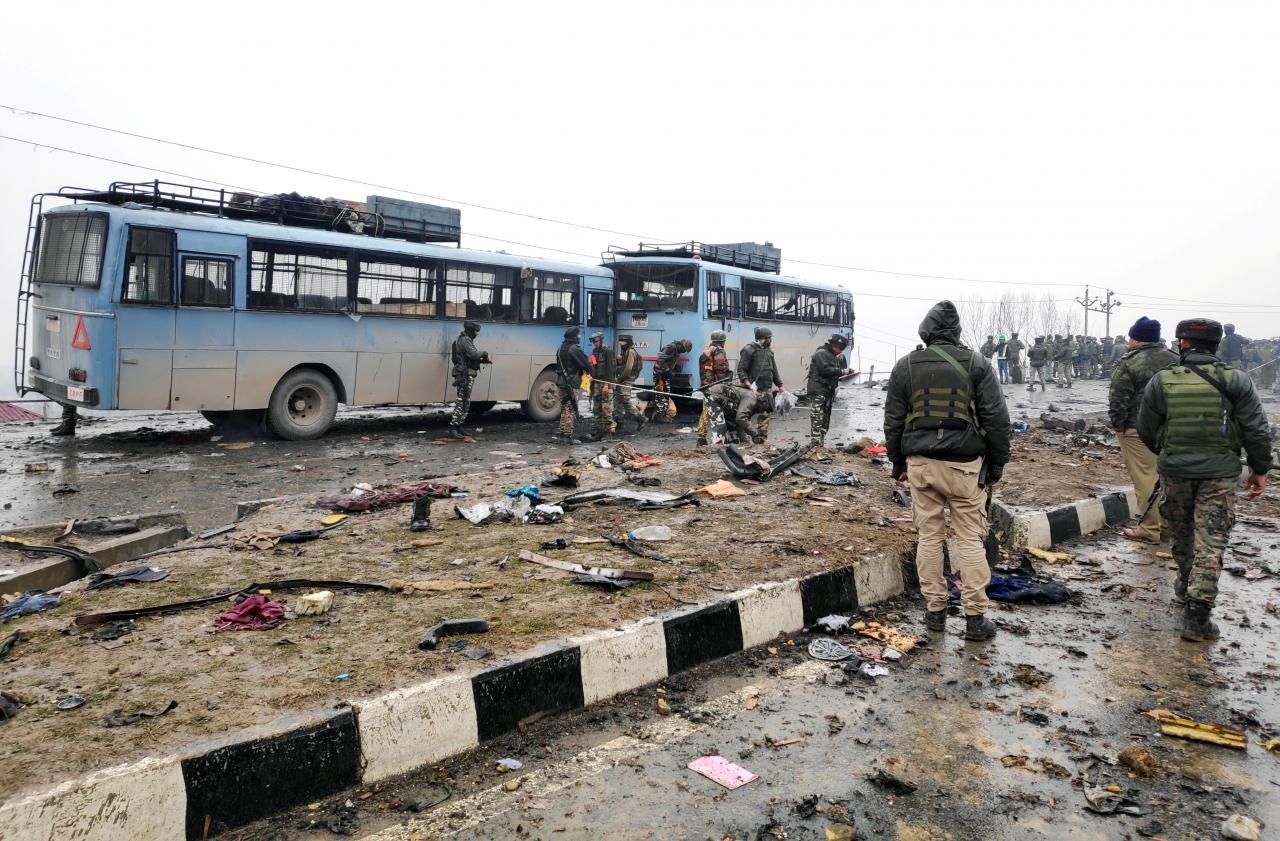 SRINAGAR, India -- A suicide bomber rammed a car into a bus carrying Indian paramilitary police in Kashmir on Thursday, killing 44 of them in the deadliest attack in decades on security forces in the disputed region, raising tensions with arch foe Pakistan.

The Pakistan-based Islamist militant group Jaish-e-Mohammad (JeM) claimed responsibility for the attack. The Indian government accused Pakistan of letting militant groups operate from its soil and called on it to take action.

Islamabad said it rejected the suggestion it was linked to the attack.

Kashmir is a Muslim-majority region at the heart of decades of hostility between India and Pakistan. The neighbors both rule parts of the region while claiming the entire territory as theirs.

The explosion targeting a convoy of the Central Reserve Police Force (CRPF) was heard from several miles away, according to witnesses. Mohammad Yunis, a journalist who reached the site minutes later, told Reuters he saw blood and body parts scattered along a 100-meter stretch of the main highway running through the Indian state of Jammu and Kashmir.

“We demand that Pakistan stop supporting terrorists and terror groups operating from their territory and dismantle the infrastructure operated by terrorist outfits to launch attacks in other countries,” the Indian foreign ministry said in a statement, hours after the attack.

Pakistan’s Ministry of Foreign Affairs called the attack a matter of “grave concern”. But in a brief statement early on Friday it added, “We strongly reject any insinuation by elements in the Indian government and media circles that seek to link the attack to the State of Pakistan without investigations.”

Islamabad has previously denied New Delhi’s accusations that it gives material help to the militants fighting Indian rule in Muslim-majority Kashmir. It says it gives only moral and diplomatic support to the Kashmiri people in their struggle for self-determination.

The White House urged Pakistan in a statement “to end immediately the support and safe haven provided to all terrorist groups operating on its soil”. It said the attack strengthens U.S. resolve to step up counter-terrorism cooperation with India.

Television images showed a mangled car amid rubble and snow around the site. Reuters photos showed tens of policemen surveying damaged vehicles and one policeman was seen carrying a plastic cover with guns inside.

The death toll stood at 44, a senior police official said.

The Central Reserve Force Police is a paramilitary organization that is working with the Indian military to quell the 30-year insurgency in Kashmir.

“I strongly condemn this dastardly attack. The sacrifices of our brave security personnel shall not go in vain,” Prime Minister Narendra Modi said in a tweet.

Indian forces have sporadically battled Islamist militants in mountainous Kashmir since an armed revolt in 1989 in which tens of thousands were killed, but car bombings are rare.

A video circulating on social media on Thursday purportedly featured the suicide bomber, and showed a young man holding a gun and threatening more attacks. Reuters was not able to independently verify the authenticity of the video.

The Indian foreign ministry accused the Pakistani government of giving the militant group Jaish a free run in Pakistan, saying it has allowed the group’s leader, Masood Azhar, “to operate and expand his terror infrastructure in territories under the control of Pakistan and to carry out attacks in India and elsewhere with impunity”.

The last major attack in Kashmir was in 2016 when militants raided an Indian army camp in Uri, killing 20 soldiers.

Tension with Pakistan rose after that incident when New Delhi said the attackers had come from Pakistan to stage the assault. Pakistan denied any involvement.

The attack could put Modi, who faces a general election due by May, under political pressure to act against the militants and Pakistan.

“Zero political action & Zero policy to tackle terror has led to an alarming security situation,” Surjewala said in one of a series of tweets.

Kanwal Sibal, a former top diplomat, said a diplomatic response from India would not be enough.

“They will have to do something otherwise I think it will be very difficult for government to absorb this blow and be seen to be doing nothing,” Sibal told Reuters.

The Jaish-e-Mohammad group is one of the most powerful militant groups operating in Kashmir. It was blamed for a 2001 attack on the Indian parliament that led to India deploying its military on the border with Pakistan.

In a statement carried by GNS news agency, a spokesman for the group said dozens of security force vehicles were destroyed in the attack.

Arun Jaitley, a senior minister in Modi’s cabinet, said India would retaliate, tweeting that “terrorists will be given unforgettable lesson for their heinous act”.

On Wednesday, an explosion at a school in Kashmir wounded a dozen students. The cause of the blast remains unclear.