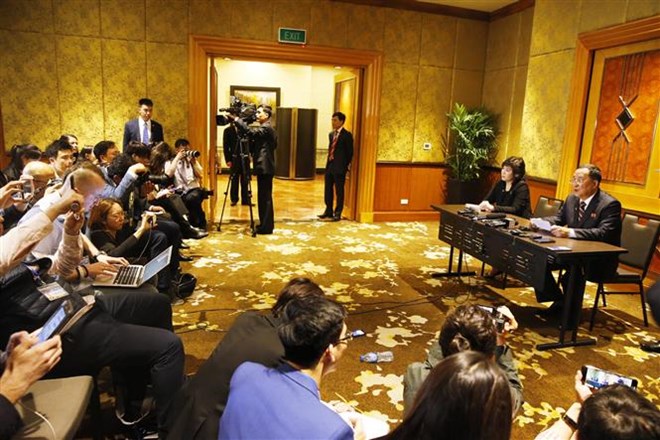 North Korea’s foreign minister Ri Yong Ho called an impromptu press conference on the night of February 28 in Hanoi, shortly after the Trump-Kim summit ended in the afternoon without any deals reached.

The two sides failed to reconcile their differences, which led to what Trump called a “walk away” earlier in his press conference in Hanoi, the Vietnam News Agency quoted Ri as saying.

According to Ri, Pyongyang had attempted to get Washington to lift five sanction articles adopted in 2016 and 2017 under 11 United Nations Security Council resolutions, which he said “hampered the civilian economy and the livelihoods of our people.”

In return, North Korea would “completely and permanent dismantle all nuclear material production facilities in the Yongbyon area, including plutonium and uranium” under the supervision of experts from both countries.

The diplomat emphasized that North Korea did not seek a complete removal of all sanctions, but only partial relief. He added that it was the biggest measure it could take at present given “the current level of confidence between North Korea and the U.S.”

President Trump and Chairman Kim had their first talks in Hanoi on Wednesday evening, and met again for a one-on-one conversation that lasted through noon on Thursday.

During the last meeting of the second Trump - Kim summit, North Korea pledged a complete halt of nuclear and missile testing, including rocket launches, to ease the concerns of the U.S., according to Ri.

The foreign minister said that if the two sides could go through this “level of trust-building regime”, then “we would be able to accelerate the process of denuclearization”.

However, Ri added, the U.S. side was insistent on North Korea’s moving “one more step” besides the shutting down of the Yongbyon plant, the country’s main nuclear facility.

“It became crystal clear that the U.S. was not ready to go through with this proposal,” the North Korean top diplomat said.

Ri said it would be difficult to come up with a better proposal than the one his country was putting on the table.

“Our principle stands and remains invariable and our proposal will never change in the future even if the U.S. wants further talks,” he said.