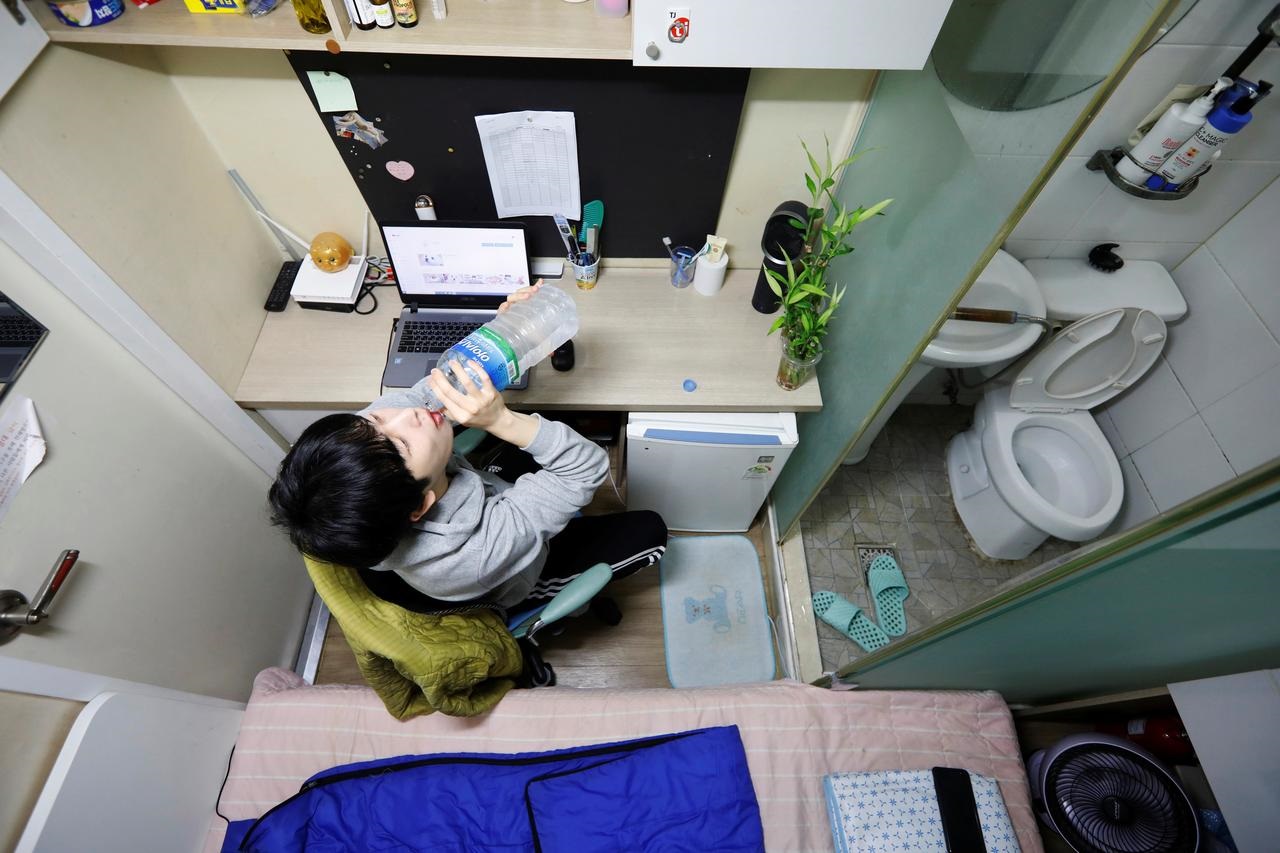 SEOUL -- Hwang Hyeon-dong lives in a 6.6-square-metre (71-square-foot) cubicle near his university campus in Seoul, which comes with a shared bathroom and kitchen plus all the rice he can eat, that he rents for 350,000 won ($302) a month.

The sparsely furnished rooms, in premises called goshi-won, were previously mostly used by less well-off students to temporarily cut themselves off from the outside world while they studied for civil service job tests.

Now they are increasingly becoming permanent homes to young people like Hwang, who identifies himself among the “dirt spoons”, those born to low-income families who have all but given up on social mobility.

The concept of dirt spoons and gold spoons, as those from better-off families are known, have been around for many years but exploded onto the political scene in recent years, undercutting support for liberal President Moon Jae-in.

Moon came to power in 2017 on a platform of social and economic justice. Yet halfway through his five-year term, he has little progress to show the country’s youth who have borne the brunt of deepening inequality.

Income disparity has instead widened since Moon took office, with the top income bracket now earning 5.5 times the bottom one, compared with 4.9 times before his inauguration, official data shows.

Hwang, who is in his third year majoring in media studies, said a corruption scandal surrounding former Justice Minister Cho Kuk was a wakeup call for dirt spoons like himself who may have once believed that hard work will make a difference.

Cho and his college professor wife were accused of using their positions to help their daughter gain admission to medical school in 2015.

Cho acknowledged he was a gold spoon and a “Gangnam liberal” motivated by social justice, but the approach backfired and he stepped down in October after only a month in the post. His wife is facing trial on allegations of forgery and financial fraud.

To many struggling youth, the scandal - which fueled some of the largest protests of Moon’s term - showed how gold spoons get further ahead with the help of their parents’ status and wealth.

In a September poll of 3,289 people by recruiting service provider Saramin, three-quarters of respondents said parents’ background was key to children’s success.

“I can’t complain that we have different starting lines,” said Kim Jae-hoon, 26, who also lives in a goshi-won cubicle.

Kim works as a part-time waiter at a bar near his school and gets by on 400,000 won a month for rent, food and allowances.

Most meals are “cup rice” he prepares in the shared kitchen, menial fare of rice and basic toppings - eggs, half an onion and sauce.

Support among voters aged 19 to 29 dropped from 90% in June 2017 to 44% by October, according to a poll by Gallup Korea, while support among those considered on low-incomes has fallen 44 percentage points fall since mid-2017.

“President Moon’s been talking about equal opportunity, a level-playing field and justice. But, I feel a sense of betrayal because the current situation is far different from what he promised,” said Hwang, who voted for Moon.

Older workers are also feeling the pinch as Moon tries to improve employment opportunities and social justice for young workers.

In a televised town hall meeting last week, Moon conceded he had fallen short on those promises and said his declining support among youth was proof he had let them down.

The idea of dirt spoons and gold spoons has resonated in popular culture in recent years.

The film “Parasite” directed by Bong Joon Ho about two families at the opposite ends of the social spectrum has been a smash hit at home and abroad, winning the Cannes Palme d’Or and touted as an Oscar “Best Picture” contender.

A popular fantasy digital cartoon called “Golden Spoon” features a poor boy swapping his family with his rich friend’s by eating with a magic gold spoon is set to be serialized as a TV drama.

Even the hit boyband BTS, known as a “dirt spoon idol” for their early struggles, tackles the social divide, singing “Don’t call me a spoon! I am just a human” in the song “Fire”.

Gold spoons are now a hot gift item, replacing gold rings traditionally given to children on their first birthdays, wishing them a wealthy life.

The fact that gold and dirt spoons are portrayed in popular culture in such a diverse range is reflective of the bitter hopelessness among the have-nots, said Kim Jong-min, the leader of civic group Youth Taeil, which supports young jobseekers and temporary workers.

“But, powerful people in the Moon government and the ruling party - they portray themselves as reformists, but they are just the same old politicians that are not listening to the suffering of the low-income class,” he said.