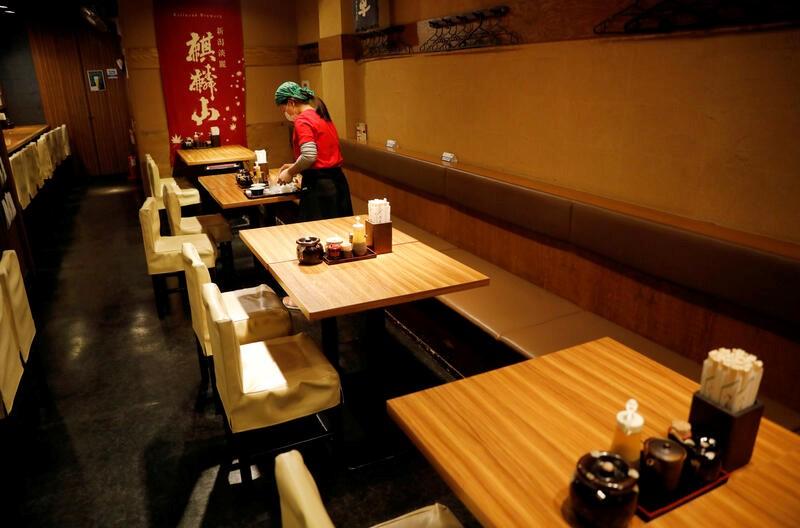 TOKYO -- As the coronavirus jolts Japan, the government’s huge stimulus package has come under fire from hard-hit restaurant owners for channelling funds for items like wagyu beef, melons and tourism rather than accelerating help for firms with burning cash needs.

The restaurant industry’s struggles highlight a larger problem in Japan’s revival plan, which at $2.2 trillion is the size of Italy’s economy but is still falling short of sufficient support to an important segment - small businesses which employ 70% of the nation’s workforce.

That puts at risk Japan’s recovery from the worst postwar recession it is now facing. The $232 billion restaurant industry is crucial to boosting growth as it, together with lodging, creates about 1.3 million new jobs a year, or roughly 17% of all the new employment.

More than 190 small businesses including 30 restaurant operators have gone bust during the current health crisis.

Yet, the government’s slow response in pushing through billions of dollars stuck in paperwork is threatening the same fate for many more firms in urgent need of cash to pay salaries and rents.

In contrast, authorities have rapidly pressed ahead with plans to spend nearly $16 billion for a “go-to” campaign to promote tourism, and $1.3 billion to help politically powerful farmers and fishermen promote expensive foodstuffs such as mangoes, tunas and yellowtails. An extra $90 million has also been set aside to promote international flights - when almost all planes are grounded.

“We, as well as many others, are running out of money. If the situation is left as is, we will go under one after another. Then, no one will be left to benefit from the tourism campaign,” said Yoshikazu Moriyama, 42.

Sales at Moriyama’s six fish joints called “IROM Inc.” have tanked 90% and he’s struggling to pay rent and salaries for some 100 staff.

“What we need now is financial support to help us pay rents and compensate for business closures rather than future campaign on tourism,” Moriyama told Reuters.

Some owners say the government’s subsidy of up to $55,000 for each firm to cover rents is insufficient, and that it could afford to do more to keep businesses open and free up cashflow. Last year, rents for all of Japan’s restaurants totalled $13 billion - less than the $16 billion going into tourism promotion.

The government’s subsidy list includes items such as five-star sirloin Kobe beef steak, which costs some $37.20 for 100g, and top-quality Yubari melon that sells for more than $90 per 1.6-kg fruit.

Agriculture ministry official, Satoru Nishio, said the subsidy, which also covers expensive mangoes, strawberries and tunas, was intended “to back farmers facing a decline in inbound tourists and exports.”

The government subsidises half of the cost of buying the produce for e-commerce, take-away services and provision of school meals. For example, traders get up to $9.31 per 100g of wagyu beef and up to $22.34 per kilo of melons.

Funds tied up in red tape

While a total of $190 billion in financing, loans, cash subsidies and other benefits have been set aside for small businesses, some analysts say struggling firms have been deprived of quick access to much-needed cash due to red tape.

“A government financial agency should provide loans that can be allotted to rents to prevent cashflow from drying up,” said Kota Matsuda, a former lawmaker who now runs a chain of 30 restaurants including 22 Hawaiian-style restaurants called Eggs ‘n Things, employing about 600 workers.

“It’s impossible to cover rents solely with subsidies,” said Matsuda, who has applied for funds but has been frustrated by the cumbersome process as he tries to meet cash needs of more than $650,000 for salaries and $372,370 for rents.

Sales at his restaurants, which reopened fully last Saturday, declined by 90-95% year-on-year in April.

IROM’s Moriyama, who applied for a couple of subsidies, said they were “far from enough” to make up for the losses.

“I can’t foresee what will happen to my business.”