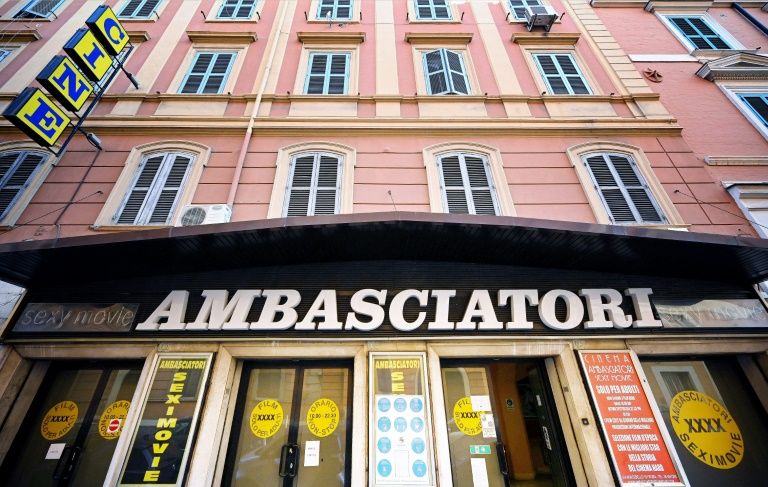 It survived the advent of DVDs and the internet era of instant gratification. Now Rome's last remaining adult cinema says it is sure to also overcome its latest challenge as it grapples with coronavirus.

Discreetly tucked away between upmarket apartments and hotels, a stone's throw from the Italian capital's main train station, the "Ambasciatori" continues to show its vintage pornographic films to the delight of its customers.

In early March when Italy shuttered against the devastating pandemic, its movie houses closed too, and the Ambasciatori was no exception.

But after Rome eased its lockdown restrictions over the summer, the adult landmark once again opened for business with social distancing measures in place.

Outside its presence is advertised by a simple sign that says "Cine" (Cinema), but stepping inside, a red poster sets the tone — "Sexy movie, adults only".

It promises customers a selection of "cult productions" and the "best stars in the history of hard cinema".

"We will survive COVID," Carlo, the Ambasciatori's supervisor and cinema manager, tells AFP, declining to give his full name.

"A lot of customers are calling us to find out when they can come back," he adds.

The line-up for the evening showcases two classic adult movies from the 1980s — "Palestra per signora" (Gymnasium for women) and "Delirium carnale" (Carnal delirium).

They feature mustachioed men with mullet-style haircuts in shirts with hang-glider-sized collars and women in garter belts with big hair, straight from the TV classic "Dallas".

Wearing surgical masks, around a dozen customers, all of them male, take their scattered places on velvet seats in a magnificent black marbled room.

The screen lights up and the show begins.

"There are people here all day — men, some of them rather old" and the odd couple "sometimes in the evening," Carlo says.

"They also come to meet up with old friends, to watch old films," he adds.

It may not be famous like the Colosseum or Trevi Fountain but the Ambasciatori has cemented its own cult-like status in the Eternal City.

Boasting 400 seats and a large upstairs balcony, the theatre exudes a vintage atmosphere.

Over the years, with the advent of new technology, Rome saw its more than 20 adult theatres close down one-by-one, until only the Ambasciatori was left.

Its original owner has since died, but his heirs have taken over "and business continues," Carlo says.

In the entrance hall, large posters advertise movies with titles like "Fleshdance" and "Hot Mouth and Velvet Hands".

Past stars like Ilona Staller, better known by her stage name "Cicciolina", who became an Italian MP in 1987, and famous Italian adult movie actor Rocco Siffredi adorn the walls.

One poster for the movie "Never Say Never to Rocco" promises that the "Italian stallion" will soon return to the theatre.

At the top of a staircase is the real pearl of the theatre — the projection room, worthy of the 1988 Giuseppe Tornatore movie "Cinema Paradiso".

In one corner, piles of 35 mm reels are stacked in boxes with evocative names.

"In my 33 years here, I've seen it all," quips Claudio, the theatre's projector operator.

Both Carlo and Claudio remain positive about the Ambasciatori's future.

"I hope the Ambasciatori will last. It's a beautiful universe," Carlo says, pensively.