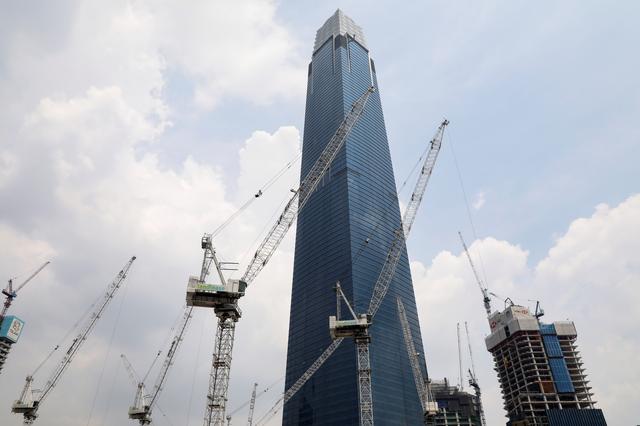 KUALA LUMPUR -- Malaysia’s central bank provided a rosier growth outlook for 2021 after the economy suffered a smaller contraction in the third quarter, but said it would continue to help households and businesses withstand the fallout of the COVID-19 pandemic.

Gross domestic product fell 2.7% in July-September, smaller than the 3.2% decline forecast in a Reuters poll and showing a marked improvement on the 17.1% slump in the second quarter.

The trade-reliant economy recovered from its first contraction since the 2009 financial crisis after the government began gradually easing curbs to contain the virus in May.

The central bank said 125 basis points worth of rate cuts this year would support 2021 growth, but that it would continue to make “policy support and assistance” available.

“Going into 2021, growth is expected to recover, benefiting from the improvement in global demand and a turnaround in public and private sector expenditure amid various policy support,” said Bank Negara Malaysia (BNM) Governor Nor Shamsiah Mohd Yunus at a virtual news conference.

“Future monetary policy considerations will continue to be guided by evolving conditions.”

Private consumption eased 2.6% in the third quarter from a year earlier after a 5.6% decline in the previous three months, the central bank said, while manufacturing grew 3.3% after a 18.3% drop in the second quarter. Gross exports jumped 4.4% in the July-September period after a 15.1% fall.

The BNM also revised its 2021 projections, raising the midpoint growth forecast to 7% from an earlier average of 6.75%.

Barclays said it expected the central bank to leave rates unchanged throughout 2021, with a low risk of a 25 basis point cut.

While some economists worried that the reimposition of coronavirus restrictions in October would dampen the recovery in Malaysia in the last three months of the year, the central bank said the risks to global growth from COVID-19 had eased.

“The risk to growth from these resurgences is not expected to be as severe as the magnitude of contractions observed in the second quarter,” Nor Shamsiah added.

Analysts at Capital Economics said Malaysia’s outlook was dependent on how well the government managed to contain the spread of the coronavirus. Total infections tripled to over 43,000 cases since a fresh outbreak in September.

“If Malaysia is able contain the second wave, as others in the region have been successful in doing, the economic impact should be relatively small,” Alex Holmes, Asia economist at Capital Economics said.