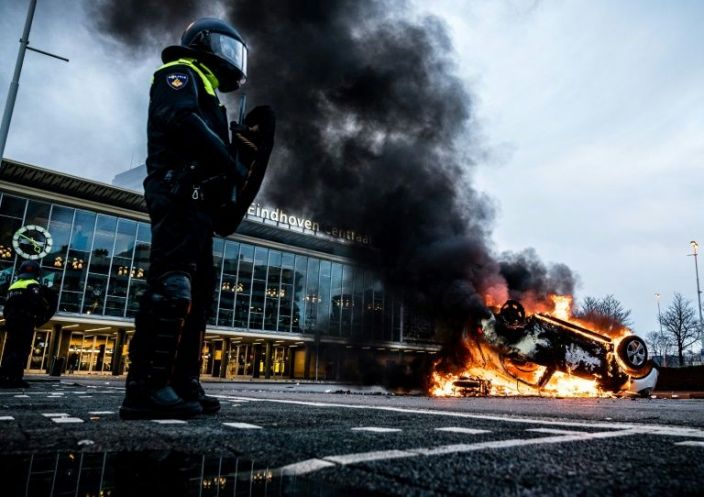 A Dutch appeals court ruled on Tuesday that the government's controversial coronavirus curfew must stay in place until a hearing later this week to decide whether the measure is legal.

The government was stunned when a judge ruled earlier that it must immediately lift the Netherlands' first curfew since World War II because it had wrongly used emergency powers to invoke it.

The case against the curfew -- which sparked the Netherlands' worst riots in decades when it was introduced in January -- was launched by the Viruswaarheid (Virus Truth) campaign group.

But just minutes before the 9pm curfew was due to start, an appeals court ruled that the curfew should be maintained pending a full court hearing on the legality of the measure on Friday.

The judges said they wanted to prevent a "yo-yo effect" in which no one was sure whether the curfew was in effect or not.

"In this case, the State's interests weigh more than that of Virus Truth's," the head judge said.

Dutch Prime Minister Mark Rutte had earlier appealed for people to stay home even if the government was forced to lift the curfew.

He later tweeted: "Curfew applies, also tonight. The coronavirus is not yet under control."

The decision to maintain the curfew met a furious reaction from Willem Engel, the founder of Viruswaarheid.

The group has led a series of protests against coronavirus measures in the Netherlands and promotes conspiracy theories about the pandemic.

"You are making a big mistake," he told the judge. "This is unacceptable. You have to explain yourself before a judge," Engel shouted as the judges left the courtroom.

The curfew began on January 23 and was extended last week until March 2.

Three nights of riots erupted on the weekend it started with police using water cannon and tear gas against protesters in cities including Amsterdam, Rotterdam and Eindhoven.

They were the most serious riots in the Netherlands for 40 years and led to dozens of arrests.

The Netherlands remains under its tightest restrictions since the start of the pandemic, with all non-essential shops, bars, restaurants and secondary schools closed.

The lower court ruling came as a blow to Rutte's government ahead of elections on March 17. His cabinet is currently operating in a caretaker capacity after resigning in January over a child benefits scandal.

The district judge had earlier ruled that the curfew was a "far-reaching violation of the right to freedom of movement and privacy."

The court said that the government "did not invoke the special urgency required" to use the emergency laws that it employed to bring in the curfew without going through the lower and upper houses of parliament.

Curfews were for use in sudden emergencies such as a dyke breach, the judge said.

"The curfew must be lifted immediately," it said.

Views in the Netherlands were mixed on the issue.

"Everybody's happy, I saw internet exploding with happy people," Alexandra Vos, Dutch owner of a coaching company, told AFP in The Hague about the decision to end the curfew.

Dutch student Laura Baseler said however that with a variant first found in Britain now circulating in the Netherlands, she backed the restrictions.

"I understand that some people want the curfew gone but I kind of follow the government," she said.

Viruswaarheid's Engel -- a dancing teacher whose social media posts raise questions about vaccines and the origins of coronavirus -- had hailed the earlier decision.