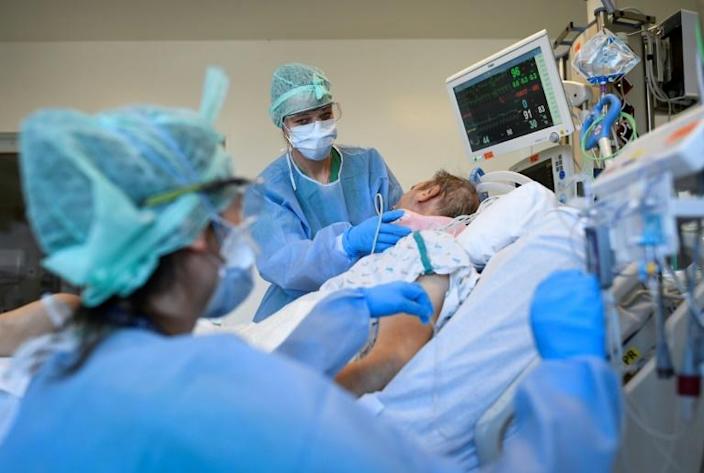 As Belgium's latest wave of coronavirus infections once more fills intensive care beds in hard-pressed hospitals, the average age of victims is dropping as the pandemic moves through the middle-aged.

There are signs that the third wave of COVID-19 to have swept through Belgium may be levelling off, but the number of serious cases that need hospitalisation is still increasing and wards are filling up.

Health authorities have ordered hospitals to set aside 60 percent of ICU beds for coronavirus cases, which in Ixelles translates to 15 of 23 places, forcing health workers to cancel some other procedures.

On Tuesday, the country of 11.5 million had 3,053 Covid victims in hospital and 865 of those in intensive care, a figure that has doubled in the past month.

Belgium has 2,000 ICU places and the first waves of the illness saw peaks of 1,285 in use last April and 1,464 in November, according to the Sciensano health agency.

But this time round many of the oldest and most vulnerable have received vaccinations and the cases are now hitting middle-aged adults, who are less likely to die but can still fall dangerously ill.

According to Ottermans, while younger adults are more likely to survive they often need longer treatment and now, a year into the pandemic, the hospital teams are stretched.

"We're tired. This third wave has been really hard," he said.

"In January and February we still had hope that we'd just see ripples but now, we're really into a third wave. It's not growing exponentially, but it's a burden, it's slow and it's dragging on," he said.

There's perhaps a glimmer of light at the end of the tunnel. Average new daily infections in Belgium dropped by 10 percent over the last week to around 4,300 -- suggesting hospitalisation rates will fall in two weeks.

"But we'll still be in the red for four to six weeks," the nurse warned.

Ottermans has a simple message for the students and teen party-goers.

"Watch out! During the first wave it was your grandparents who were sick. Now it's your parents who are getting intubated, put on ventilators. It would be really stupid for the young to infect their parents."