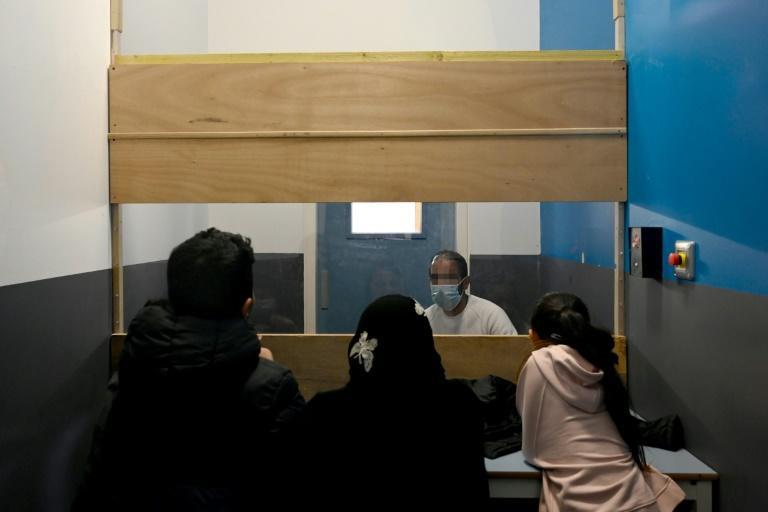 A 'constant wrench': parenthood from behind bars

Nine-year-old Shadene's face lights up; her father who is in a Marseille prison has just appeared through a door on the other side of the boxy, tiny room.

As he approaches, she stands, reaching to touch the window separating father and daughter. Automatically, his fingertips do the same.

Forty-five minutes later, a warden rings the bell -- visiting time is over.

Kamel, 40, blows kisses to the little girl and two of his sons but heading back up the stairs to his cell at Baumettes prison in the southern French port city, his face darkens.

"It's too short, I don't have time to make the most of them, to give each of them some time," says Kamel, who is two years into an eight-year jail sentence for fraud.

On the other side, Shadene is fighting back the tears.

"I'm happy to see him but I couldn't tell him about my school trip," she says.

Both their first names -- like all the prisoners and children quoted in this story -- have been changed to protect their identity.

The visit on a Saturday in February is nothing out of the ordinary.

AFP was able to witness it after gaining rare authorisation to attend prison visiting, as part of a more than 12-month investigation into parenthood from behind bars.

The United Nations Convention on the Rights of the Child guarantees a child's right "to maintain personal relations and direct contact with both parents on a regular basis".

It also stipulates that states parties to the convention "render appropriate assistance to parents... in the performance of their child-rearing responsibilities".

Some 600,000 children have a parent in prison on any given day in the European Union, according to estimates by the Children of Prisoners Europe network.

In the vast majority of French cases, children see their parents in the prison visiting room, which at some sites is large with no privacy and, at times, a guard present.

For France's independent body, the Defender of Rights, the best interests of the child are still not sufficiently taken into account in the country's prisons.

Her hair tied back in a ponytail and wearing a pale pink tracksuit, Shadene arrived an hour early in order to be sure of seeing her dad.

"Being a minute late is enough to get the whole thing cancelled", says her grandmother, who has brought her to the prison.

She then faces a wait in two secure rooms packed with other visitors and is anxious because the last time her hair slide set off the security metal detectors.

"The adults talk about business, concerns at home, it leaves very little time for the child," she added.

Such obstacles lead to "a relationship which wanes, becomes emptier over time, each behind an invisible wall".

The "wall", she said, only becomes bigger when detainees and their children constantly try to "protect the other" by concealing things like depression, problems at school, a fight with another inmate -- or even the imprisonment itself.

For nearly two years, 36-year-old Magali hid the truth from her young daughter, Emma, fearing the effect it would have on her of hearing that her mum was locked up for four years.

"I used to let her think I was in hospital," says the woman, with a serene, oval-shaped face who herself grew up with a father habitually in and out of prison.

At the age of seven, "when she knew how to decipher (the word) 'prison' on the front of the building, I talked to her," Magali said.

Having encountered the prison bars on a weekly basis though, the little girl had already figured it out.

France in the dock

Family is key in helping a prisoner to think ahead to the future, Baumettes prison director Yves Feuillerat told AFP.

Kamel, for instance, has learned to read while in prison so he can write letters home to his children, but also "so they're proud".

In Britain, where there are more children with a prisoner in the family than with divorced parents, authorities have taken this on board.

Under the Invisible Walls programme, prisoners get dedicated time with their children to do simple things like helping them with homework or giving them a bath.

Introduced first in south Wales, the scheme has widened out to other regions and reoffending rates have halved, a British justice ministry study has shown.

In Italy, according to a UN report, mothers are permitted to "serve part of their sentence at home, provided they have children under 10 years old".

But France has been criticised for hampering visiting rights and has been condemned several times by the European Court of Human Rights over prison conditions.

The sound of keys turning

Once a year, Baumettes inmates get together with their children in the prison's large gymnasium for a day of fun, organised by support groups.

The last time was in March last year, just before France first went into lockdown.

The parents baked cakes, hung balloons and could enjoy watching their children run, play and laugh, in scenes that are a far cry from normal prison visiting.

Despite his eight children buzzing around him and an atmosphere of high excitement, Kamel is sat down, gently stroking Shadene's hair as she snuggles up close.

"I want to take advantage of every second. Moments like this when you feel almost like you're in the real world are rare," he says, quietly, as if trying not to break the spell.

Her cheeks bright red from playing football, Magali's daughter Emma admits she is curious to see prison "from the inside".

The 10-year-old knows about prison brawls from the internet and finds it hard to think that "mum lives here".

When it's time to go, the children are reluctant.

In groups, surrounded by navy blue uniformed prison guards, they experience for a few minutes their parents' daily norms -- the sound of keys in locks, heavy metal doors that you can never open yourself and the maze of barred corridors.

Parents try not to break down in tears.

A blond teenager sums it up: "It was the best day in such a long time and yet, I feel like crying."

She heads a support group that helps prisoners and families in Marseille avoid a breakdown in contact, unless a parent is "too toxic" for the child.

Initiatives like fun days, therapy sessions or physical and psychological help for children rely solely on such associations, laments Emmanuel Gallaud, from an umbrella body overseeing them.

Within prisons, he said, "priorities are safety and the clock".

Currently, the federation is most focused on children who can't visit a parent in prison, perhaps because nobody would otherwise take them, Gallaud said.

That was the case for Nicole, convicted of accessory to murder, who has been in Baumettes for three years.

Following her arrest, her family turned their backs on the 49-year-old auburn-haired woman.

She only sees her youngest child, who is 12 and has been placed with a foster family, thanks to an association's help.

They meet up in a wing separate from the prison building in a warm, welcoming room, with drawings on the wall, children's furniture and toys.

Her daughter is brought in by an association member rather than by guards like in normal prison visiting.

"Being able to play a board game, read a story together, will loosen things up" especially for the smallest ones who can't yet talk and have space to communicate through play or running about, Duborper said.

This kind of facility which is funded by public and private money is only available in half of French prisons.

Access to another type of setting meanwhile, that of small flats where prisoners spend between six hours and three days as a family, was also found to be uneven across the country by the Defender of Rights in 2019.

By law, prisoners have the right to use a family flat once every three months, but only 52 out of the 185 prisons in the country actually have them.

Only after seven years behind bars did Eva, who is serving a 20-year jail term, get the chance to spend 24 hours in a family flat -- and it proved quite a shock.

She realised that she still thought of herself as mum to two small boys, whereas they were now teenagers.

"I was used to putting them both in the bath, and the big one closed the door of the bathroom, preventing me from coming in, it was weird," she said.

Through little things -- "the older one likes tomatoes now" -- it really hit home that she had missed out on a lot.

Even with letters, visits and phone calls, she said she still felt a "constant wrench" and had the sense "of missing everything".

Imprisonment also leads to a shifting in roles within the family, as Kamel has seen.

At home, he says, his eldest who is 15 has stepped up, although his wife who doesn't make decisions without consulting him still insists he "plays his role as dad, even in prison".

Families have suffered greatly during the health pandemic, which completely halted prison visiting for two months in France last year.

Parent-child meet-ups outside of normal prison visits resumed in October but are sporadic and don't happen everywhere, while use of family flats remains suspended.

Kamel no longer has the heart to see his two-year-old who cries behind the plastic barrier.

The prisons' inspector, in an interview with France's Liberation daily, described the visitation experience since the onset of Covid-19 as "atrocious".

Without the family gatherings, Nicole has gone six months without seeing her daughter.

And when AFP met her again in January, she admitted with reddened eyes that she had attempted suicide.