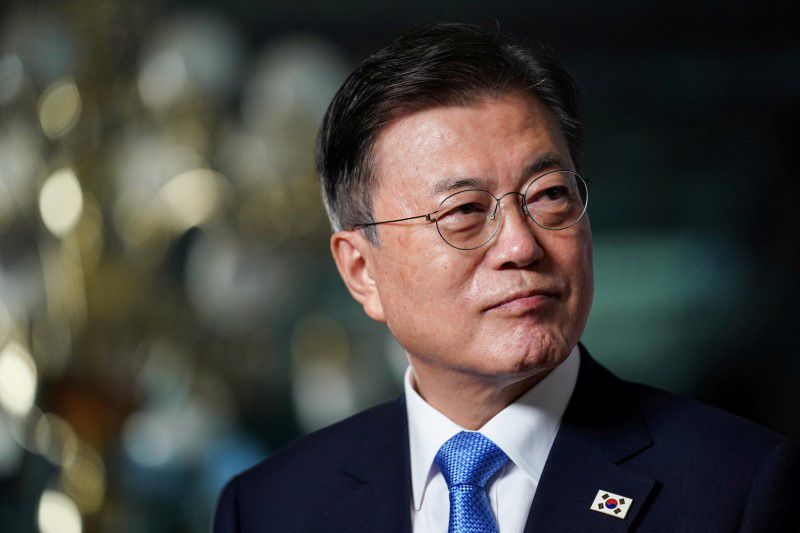 The remarks were made at a meeting of a public-private committee created to explore ways to boost vaccine production amid global supply shortages and shipment delays, Moon's office said.

Moon said he would designate COVID-19 vaccines as one of three national strategic technologies, along with semiconductors and batteries, aiming to ramp up investment, give tax breaks and offer other incentives to help firms localise materials, parts and equipment.

"We will strive to take a leap forward to become one of the top five global vaccine producers by 2025," Moon told the meeting.

The project aimed to nurture some 200 new medical scientists, 10,000 clinical trial professionals and 2,000 bio production workers every year, he said.

Health Minister Kwon Deok-cheol said the funds will also be used to support the development of homegrown vaccines, including securing original technology for mRNA products.

Seven local drugmakers are set to launch the third phase of their respective clinical trials in the latter half of this year, starting with SK Bioscience in August, Kwon said.

"Currently the frontrunning candidate is (SK Bioscience's) protein-based vaccine, which we will work to distribute for public use early next year," Kwon told a briefing.

"Local companies also formed a mRNA vaccine consortium in June, with the goal of developing a Korean vaccine by the end of next year."

Moon added he is seeking to expand international cooperation by forging vaccine partnerships with Germany, Britain and other countries, and bringing in foreign investment and companies.

He and U.S. President Joe Biden agreed to clinch a partnership that blends U.S. vaccine expertise and Korean production capacity at their summit in May. read more

Moon has made vaccine production drive a key priority for the remainder of his term, due to end in March, facing pressure at home over a fourth COVID-19 wave and a slowed immunisation campaign.

Some 39.6% of the country's 52 million population had received at least one shot as of Wednesday, compared with more than 70% in other rich nations such as Singapore and Britain. Around 14.4% of Koreans have been fully vaccinated, according to the Korea Disease Control and Prevention Agency (KDCA).

South Korea aims to push up the number to 70%, or some 36 million, by September.

The KDCA reported 1,776 cases for Wednesday, as the daily count spiked despite toughest distancing curbs to smother the virus amid a summer vacation season and the rise of the more contagious Delta variant.