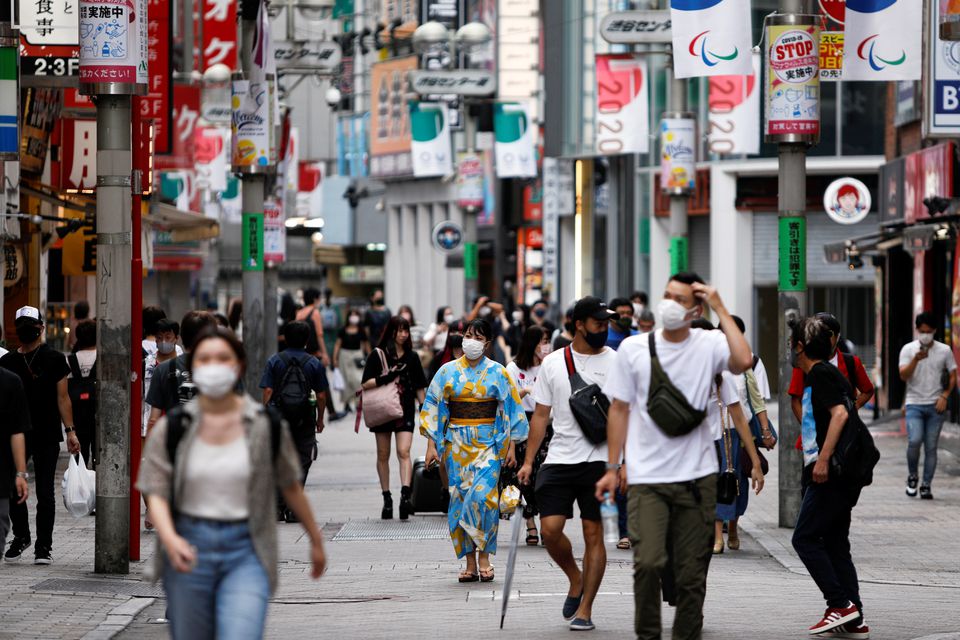 Japan to extend COVID emergency curbs in Tokyo, other areas

TOKYO -- Japan said on Thursday it will extend emergency COVID-19 restrictions in Tokyo and other regions until the end of this month to curb infections and prevent hospitals from being overwhelmed, saying it was too early to let down its guard.

Japan has been struggling with a fifth wave of the virus and last month extended its long-running curbs until Sept. 12 to cover about 80% of its population.

However, the number of severe cases and the strain on the medical system have not eased sufficiently in Tokyo and surrounding areas to allow restrictions to be lifted.

The government will extend the measures until Sept. 30, including for Osaka, Economy Minister Yasutoshi Nishimura said after meeting with an advisory panel, which ratified the plan.

Japan's emergency curbs have centred on asking restaurants to close early and refrain from serving alcohol.

Some signs of improvement around the nation mean that two prefectures out of 21 will move from the state of emergency measures to more targeted restrictions, while a number of other prefectures will remove all curbs.

"I believe we're starting to see results, but it's still too early to lower our guard," Health Minister Norihisa Tamura said at the meeting.

The plan will be formalised at a government task force meeting later on Thursday and announced by Prime Minister Yoshihide Suga at a news conference.

The Nikkei daily, meanwhile, reported that the government is moving towards easing international entry restrictions by reducing the quarantine time for people returning from overseas to 10 days from the current 14 if they have had vaccines approved by the Japanese government.

Local media said other measures, such as allowing restaurants to extend their opening hours and easing restrictions on alcohol sales, could be introduced as the number of vaccinations in the nation rise.

Japan's vaccine rollout took place later than with many other nations but roughly half of the population has now been fully vaccinated.

Tokyo's new daily coronavirus infections totaled 1,834 on Wednesday. The country has reported around 1.6 million cases in total and 16,436 deaths, although the death rate has declined in the latest outbreak.