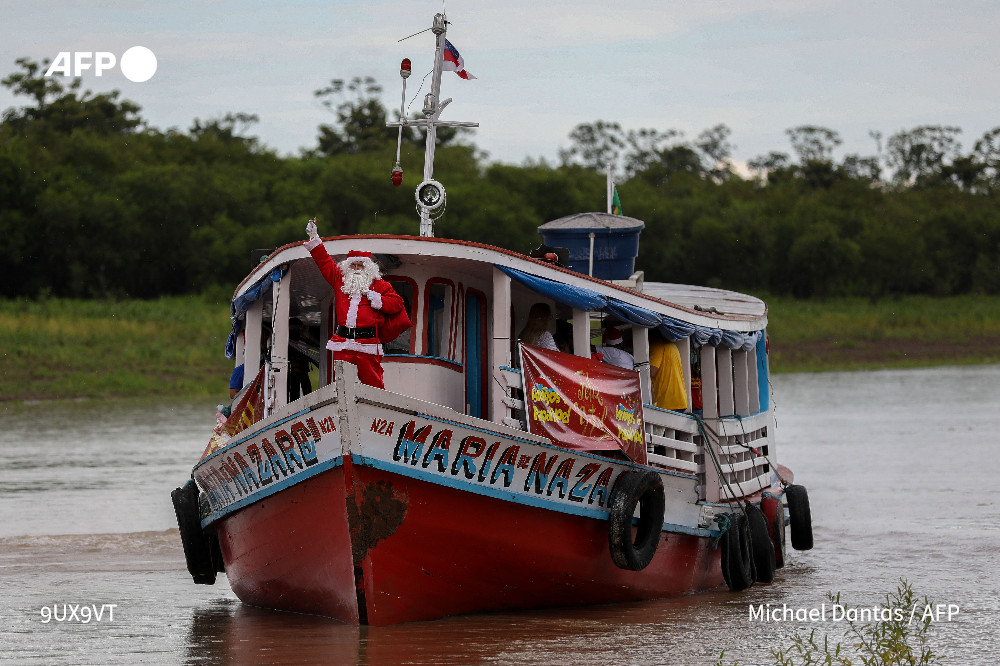 In Brazil's sweltering Amazon, Santa swaps his sled for boat

In the heart of Brazil's steaming-hot Amazon region, a sled would be of little use to Father Christmas.

Instead, perched on the prow of a rumbling river boat, he waves cheerily to the excited children who wait for him at river's edge.

His red-and-white costume stands in sharp contrast to the emerald green tones of the world's largest tropical forest and the muddy brown waters of the Solimoes River, which feeds into the mighty Amazon.

"Merry Christmas!" Santa cries, vigorously ringing a bell as the boat approaches the town of Parana da Terra Nova, 15 miles (24 kilometers) from Manaus, the largest city in the Amazon.

Part of a seasonal initiative by nonprofit group Friends of Father Christmas, he travels to impoverished communities of "Ribeirinhos," families living along the river.

When he finally sets foot ashore after a three-hour journey, this Not-Your-Average-Santa does what Santas do everywhere, opening his arms to greet the giddy children who run up to meet him.

"You can't change the world, but you can make children smile at Christmastime," Santa tells AFP.

(Don't tell the children, but his real name is Jorge Alberto, he is 57 years old and his beard, sad to say, is fake.)

Furthermore, he lets AFP know, there's nothing really jolly about having to wear the heavy plush outfit in the sweltering Amazon heat, and bringing presents to kids in the most remote regions is no cakewalk.

Santa has to borrow a small boat to get into one narrow branch of the river, and he walks with trepidation across a rough-hewn wooden footbridge that inspires little confidence.

But when the Amazonian Santa arrives at his destination, the payoff is huge: the ear-to-ear smiles on the faces of children who are able, for a moment, to forget the harsh realities of life in a poverty-stricken, Covid-scarred region.

"Our challenge is to go to places where no one else goes," says Denise Kassama, 50, the coordinator of the project, which aims to bring Christmas cheer to 4,000 children this season. "We don't just come to distribute gifts, we come to bring joy."

So even if there was no white Christmas here -- the late afternoon instead saw a torrential downpour -- Santa and his "elves" are undaunted. They organize games, apply cheery makeup to eager young faces and, yes, spread a good deal of joy.