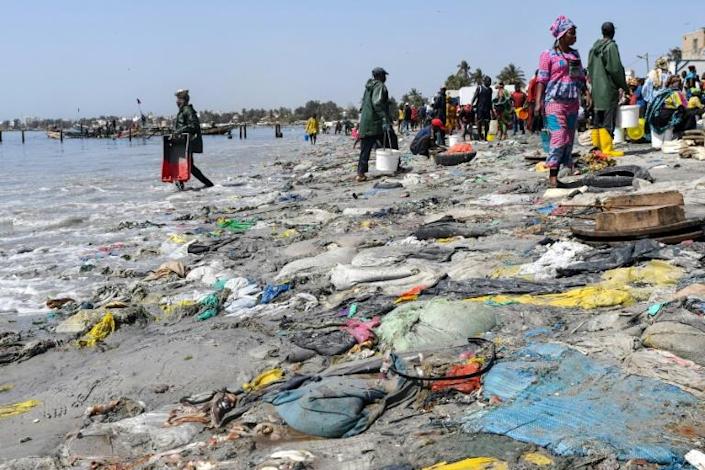 Plastic treaty would be historic for planet: UNEP chief

The world has a rare opportunity to clean up the planet for future generations by uniting behind an ambitious treaty to tackle plastic trash, the UN environment chief told AFP.

Inger Andersen said a global plastics treaty being negotiated in Nairobi "holds the potential and the promise of being the biggest multilateral environmental breakthrough" since the Paris climate accords signed in 2015.

"This is a big moment. This is one for the history books," the executive director of the UN Environment Programme (UNEP) told AFP in an interview.

The framework for a legally binding plastics agreement is still being hammered out ahead of a UN environment summit starting on Monday in Nairobi, where UNEP is headquartered.

There are competing proposals being considered but more than 50 countries have backed calls for a treaty that includes tough new controls on plastics, which are largely derived from oil and gas.

This could include limits on the manufacture of new plastic, or the phasing-out of single-use products that choke oceans and marine life and take centuries to break down.

Delegates meeting in Nairobi are expected to agree on the broad template for a treaty and establish a negotiating committee to finalise the terms, a process that would take at least two years.

Andersen said it was too early to speculate about specific details of the treaty but stressed it was "hopeless" to try to curb plastic litter without addressing the source.

Some 400 million tonnes of new plastic are manufactured every year -- a figure set to double by 2040.

Less than 10 percent of plastic is recycled, the rest burned or dumped on land where it often ends up in rivers and flows out to sea and drifts around the globe.

Large pieces of plastic are perilous for sea mammals and birds -- but even when the substance is broken down by the action of the sea into micro-particles, this too is absorbed by small organisms and passes up the food chain to fish or shellfish, which in turn are eaten by humans.

"Stopping the plastic tap is critical... If you continue polluting over here, and cleaning up there, that is a forever job," said Andersen, who was appointed UNEP head in 2019.

Many countries, including major plastic producers like the United States and China, have expressed general support for a treaty but not publicly endorsed any specific measures.

Dozens of major corporations including Coca Cola and Unilever have called for a global treaty, as have some of the world's largest plastics manufacturers.

But environment groups have warned that plastic giants were resisting efforts to cap production, and would try and steer talks in Nairobi toward reusing and recycling waste.

Andersen said she was buoyed by the commitments of industry -- but voluntary efforts had fallen short of tackling the crisis.

"We can't recycle our way out of this mess. That's clear," Andersen said.

It is already so pervasive that plastic has been found inside fish in the deepest recesses of the ocean, flecked through Arctic sea ice, and floating in the air we breathe.

Binding targets and a common framework would ensure a level playing field so countries and corporations felt confident they were playing by the same rules, she said.

Past global protocols had phased-out mercury and ozone-depleting substances once common in household goods, demonstrating it was possible to achieve consensus across borders and spur economy-wide change.

Some of those conventions took a decade to enshrine, by which stage tens of millions of tonnes of plastic trash could have entered the sea.

Already the amount of plastic entering the world's waterways is expected to triple by 2040 unless drastic action is taken.

"We don't have ten years to do this, and we need to get it done, and fast," Andersen said.

A treaty proposal from Rwanda and Peru has attracted the most support ahead of the UN summit, with the 27-member European Union among dozens of co-sponsors.

The text is still being negotiated, as are two other draft treaty resolutions.

But it bodes well: Andersen said it was "very unusual" for a UN resolution to have such broad backing ahead of a plenary.

"I have to be sure that this thing will land, and land with a degree of ambition. We are going to push very hard."