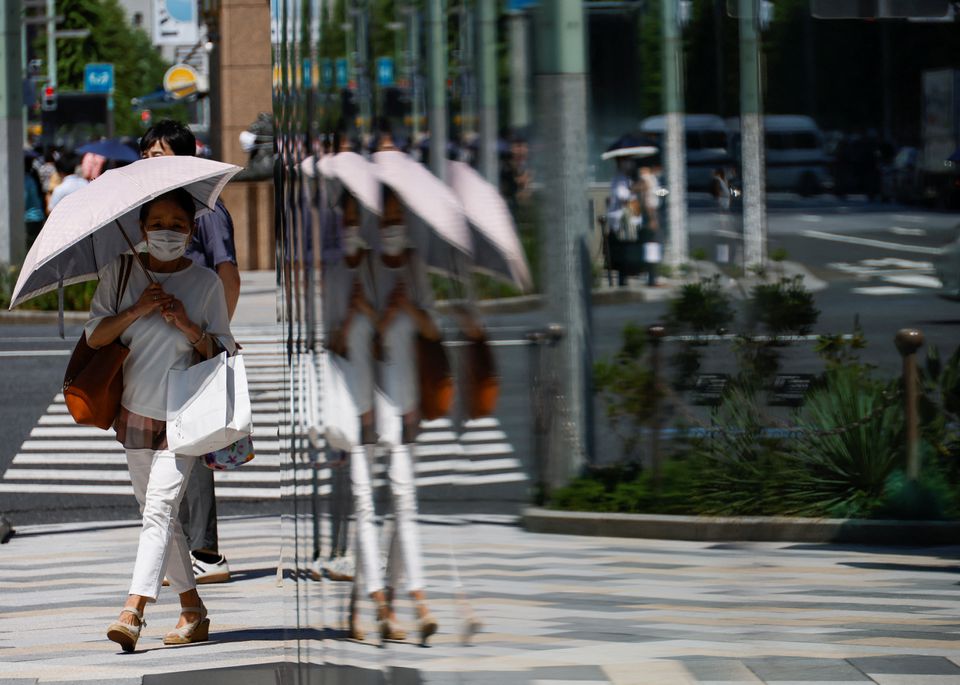 TOKYO -- Japan's electricity grid creaked on Thursday under the strain of Tokyo's hottest June since records began, with the unexpected shutdown of a power plant raising fears that tens of millions of people could be deprived of power on another scorching day.

Temperatures of around 40 Celsius (104 Fahrenheit) were expected in some parts of greater Tokyo, home to 37 million people, on the sixth day of a heatwave that began after the earliest end to the capital's rainy season in decades.

Maximum highs are not forecast to drop to 30C (86F) before Tuesday.

With power producers scrambling to bring nearly 50-year-old turbines out of mothballs, the closure of a 600-megawatt (MW) plant in northern Japan that sends supplies to Tokyo came with reserve power capacity hovering around 3% - the level below which blackouts can occur.

Operator Joban Kyodo Thermal Power Company cited unexplained technical issues for the closure but said that parts of the plant had been restarted as of 1 p.m., media reports said.

It was expected to start generating power again in the evening.

A mid-morning estimate showed the reserve ratio of power generation capacity for the Tokyo area could fall as low as 3% between 4.30 p.m. and 5 p.m., according to national grid monitor OCCTO.

The industry ministry issued a power shortage warning for the fourth day in areas around Tokyo, urging households and businesses to save electricity, without stinting on air conditioning where it would endanger health, with heatstroke hospitalisations on the rise.

Temperatures this month have been the highest since record-keeping began in 1875.

Turning off the lights

Some firms, like auto parts maker Yorozu Corp, are scaling back shifts to save power while others, like retailer Seven & i Holdings and tech giant Sony, have asked employees to save power by turning off lights and other devices.

Automaker Nissan Motor said it is operating generators at its Tochigi plant north of Tokyo from Wednesday through to Friday, while calling on offices and factories to save energy.

SoftBank Corp said it was easing up on the air-conditioning at its facilities to save power, letting the temperature rise to 26C from 25C.

The government and utilities had been preparing since spring to deal with tight power supplies during the period of peak summer demand, but that only officially begins on July 1, Friday.

The power squeeze has been expected with the suspension of some power plants after March earthquakes in the Fukushima area, a long-term drop in the number of thermal power plants amid a push for decarbonisation and delays to the restart of nuclear reactors because of stricter regulation following the Fukushima disaster in 2011.

To deal with it, the government and utilities have rebooted ageing gas-fired power plants and juggled maintenance schedules at nuclear reactors.

Japan's biggest power generator, JERA, is restarting a 45-year-old gas-fired unit in Anegasaki, near Tokyo, on Thursday, followed by a 44-year-old unit at Chita in central Japan on Friday to provide extra electricity.