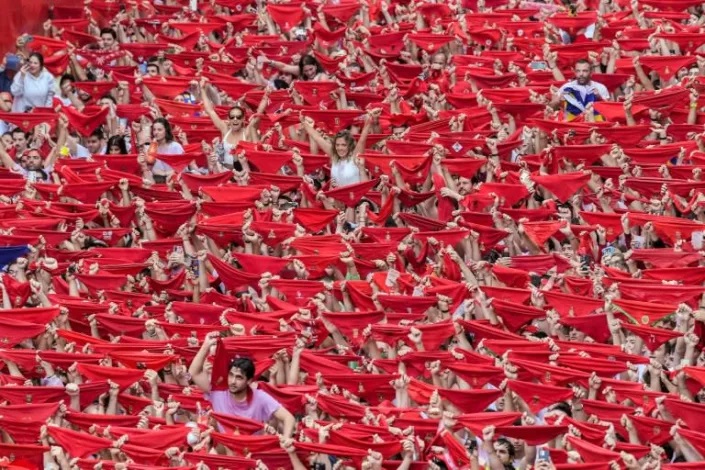 A red-and-white sea of revellers erupted in celebration Wednesday, dousing each other with wine in a packed Pamplona square as Spain's most famous bull-running festival returned after a two-year absence due to the pandemic.

The bedlam kicked off at noon (1000 GMT) with the firing of the "chupinazo" firecracker from the balcony of the northern city's town hall, which marks the official start of the nine-day San Fermin fiesta.

Thousands of party-goers from around the world -- most dressed in the traditional all-white outfit with a red scarf -- responded ecstatically, screaming "Viva San Fermin!" and spraying each other with wine.

Despite a light rain falling, the throng cheered wildly as they waved their red scarves in the air and passed giant yellow inflatable balls over their heads as scores looked on from crowded apartment balconies.

The annual festival, made famous by Ernest Hemingway's 1926 novel "The Sun Also Rises", was last held in 2019.

Local officials called off the hugely popular event in 2020 and the following year because of the COVID-19 pandemic in what was the first time the festival had been cancelled since Spain's 1936-1939 civil war.

Some 10,000 visitors packed into Pamplona's main square for the opening of this year's festivities, the town hall said, with thousands more packed into side streets and other squares to watch the opening on giant screens.

"It's absolutely crazy, I have never seen anything like this," said John Lupson, a 22-year-old Australian student who came to Spain for the festival.

"It's part of the city's identity, so after two years we really wanted to get back to it," said David Navarras, a 27-year-old Spanish student.

But the highlight is the bracing daily test of courage against a thundering pack of half-tonne, sharp-horned bulls.

Every day at 8:00 am, hundreds of daredevils race with six fighting bulls along an 850-metre (2,800-foot) course from a holding pen to Pamplona's bull ring, which this year marks its 100th anniversary.

The bravest -- or most foolhardy -- run as close as possible to the bulls' horns, preferably without being gored.

The first bull run, which traditionally draws the largest number of participants, is on Thursday.

Eric Kline, a 23-year-old engineering graduate who travelled from the US city of Atlanta to attend the festival for the first time, said he was planning to join Thursday's run.

"I have been watching videos online of past runs to prepare. My mom is worried," he said.

Dozens of people are hurt every year, although most injuries are caused by runners falling or being trampled by the bulls. The last death was in 2009.

Local authorities have also stepped up their fight against sexual violence in the wake of the notorious gang rape of an 18-year-old woman by five young men at the 2016 festival in a case that shocked Spain.

The men were initially handed nine years behind bars on the lesser offence of sexual abuse, sparking huge protests and calls for Spain's rape laws to be changed.

In 2019, the Supreme Court overturned the verdict, convicting all five of rape and upping the sentence to 15 years each.