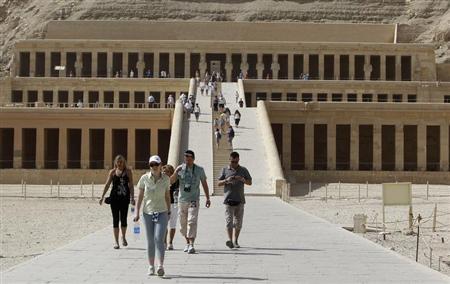 Booze and bikinis are welcome in Egypt, says tourism minister

Islamist-ruled Egypt is open to visitors who drink alcohol and wear bikinis as it sets out to boost numbers by at least a fifth this year, the tourism minister said on Sunday.

Tourism is a pillar of the Egyptian economy but has suffered since a popular uprising toppled President Hosni Mubarak in 2011 and set off two years of periodic rioting and instability.

The minister, Hisham Zaazou, said the government had "optimistic goals" for the sector, and played down comments from radical Salafi Muslim groups who have called for a ban on alcohol and women wearing swimsuits.

"Bikinis are welcome in Egypt and booze is still being served," Zaazou, speaking in English, told a news conference during a visit to the United Arab Emirates.

"We had talks with these Salafi groups and now they understand the importance of the tourism sector, but still you have some individuals that are not from the leadership saying these things," added the minister, an independent who is not a member of the ruling Muslim Brotherhood.

Islamist President Mohamed Mursi's government increased taxes on alcohol in December but backed down after the move was criticized by the tourism sector and by liberals.

Before the uprising, tourism was worth more than a tenth of Egypt's economic output. In 2010, 14.7 million visitors came, generating $12.5 billion in earnings, but arrivals slowed to 9.8 million the following year and income to $8.8 billion.

According to Zaazou, 2012 saw a recovery as 11.5 million tourists came and revenues rebounded to about $10 billion. In the first quarter of 2013 about 3 million tourists visited, a 14.6 percent rise from the same period last year, he said.

Egypt's long term target was to reach 30 million tourists and revenues of $25 billion by 2022.

Zaazou said rebuilding tourism was a national priority. To help meet the goal of increasing visitor numbers by 20 percent this year, his ministry has installed cameras in major resorts which feed live video onto its website.

"We want to show people that Egypt is safe, and the best way to show this is by live streaming. The next step will be to have these images shown on big screens in public squares in Paris or New York."

Seeking a way into new markets, Egypt tried to open its doors to Iranian tourists this year after 34 years of frozen diplomatic relations. But the move ran into protests from hardline Sunni Islamists in Cairo who accused Iran of trying to spread the Shi'ite faith, leading to the halting of all commercial flights from Iran in April.

"This is just a temporary halt, tourism will resume again and we are currently in talks with these groups who objected," said Zaazou, who said he hoped the issue would be resolved within two weeks.