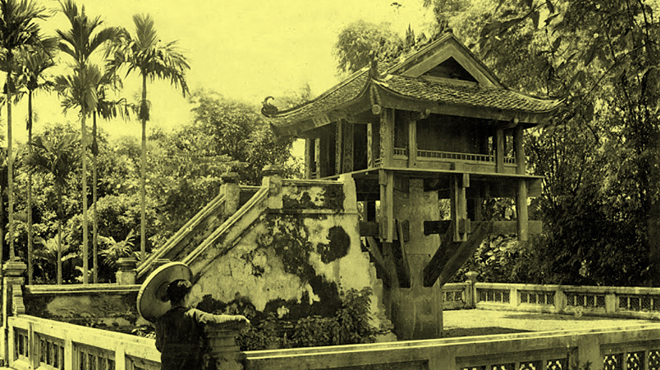 After five years of relentlessly appealing for repairs to be made to the Hanoi’s iconic, nine-century-old Mot Cot (One-Pillar) pagoda, which has sustained serious damage, its leader recently sent an “ultimatum” to the local government, stressing that he would take the matter into his own hands if his petition goes unheeded again.

In the ‘ultimatum’ sent to the Hanoi People’s Committee, Venerable Thich Tam Kien, the pagoda head, reiterated that within 30 days from May 3, if he still doesn’t hear from the local government, he and others at the pagoda will go ahead with the repairs on their own, with fixing the tiles as a temporary solution to the coming rainy season a priority task.

Venerable Kien lamented that the pagoda, which is believed to be built back in 1049, has suffered serious, prevalent roof leaking over the past several years. In heavy rains, its Buddha statues even have to wear raincoats and hats but raindrops still seep in, taking their toll on them.

Flooding has also gravely affected the pagoda, with its yards and even worshiping houses inundated after heavy rains. Fish are even seen swimming in from outside, along with rubbish, mud and dirt. Flood water has also eroded structural poles and eaten away its floors.

‘I had no other choice but to do so, as concerned authorities have procrastinated for too long,” VnExpress quoted Venerable Kien as saying.

He also petitioned to build two more compartments for worshiping the pagoda’s founders and as new shelter for its monks as the pagoda currently has limited living space for both its monks and visitors. However, the project has yet to win a nod from the local government.

According to Do Viet Binh, chair of the Ba Dinh district People’s Committee, following Venerable Kien’s ultimatum, his committee launched an inspection on the conditions of the pagoda, which concluded that the damage isn’t very serious.

He denied neglecting the pagoda, saying it suffered only one severe flooding in 2008 and no more since the district upgraded its sewage system, yards and fences.

Binh added that as the Mot Cot Pagoda is a special national relic, it takes quite a lot of time to gather authority and expert opinions regarding the revamp and construction of more facilities.

In May, the committee will hold more workshops to promptly proceed with the pagoda’s renovation.

It will also send people to fix the roof tiles for now, Binh added.

The One Pillar Pagoda, formally known as Dien Huu or Lien Hoa pagoda) is a historic Buddhist temple in Hanoi and is considered one of Vietnam's few iconic pagodas.

Upon monk Thien Tue’s counseling, King Ly Thai Tong, who ruled from 1028 to 1054, constructed the pagoda in 1049 to express his gratitude to Bodhisattva Avalokiteshvara, who he met in a dream and believed gave him his son.

The pagoda was modeled after a blooming lotus with a pillar erected amidst a lotus pond, just like the lotus the Bodhisattva was seated on in the dream.

The pagoda, built of wood on a single stone pillar of 1.25 m in diameter, was renovated by King Ly Nhan Tong in 1105.

In 1954, the French Union forces destroyed the pagoda before retreating. The pagoda was rebuilt afterwards.

The Mot Cot pagoda was recognized as “The unique architecture in Asia” by the Asian Record Organisation in late 2012, Vietnam's first Asian record in religious architecture.

A replica of the pagoda was built in Ho Chi Minh City’s Thu Duc district in late 1950s.