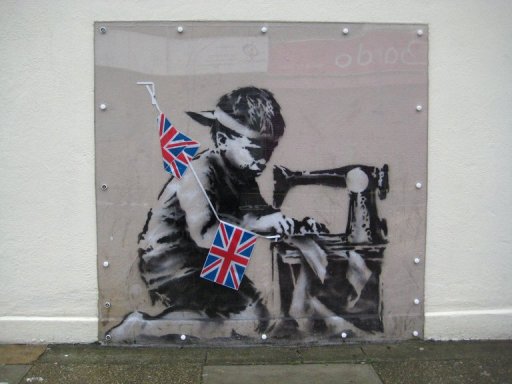 LONDON – A work by renowned British graffiti artist Banksy that was withdrawn from a controversial auction is being put up for sale again in London, auctioneers said Saturday.

The mural, called 'Slave Labour', mysteriously vanished from its original site on a wall in north London in February before appearing on an auction list in Miami later that month.

The work, which shows a boy making Union Jack bunting on a sewing machine and is an apparent comment on sweat-shop labour, was pulled from sale at the last minute, apparently after pressure by campaigners who wanted it returned to its original home.

The work had first appeared in May last year on the wall of an outlet of thrift store Poundland in the Wood Green district of Haringey shortly before the Queen's Diamond Jubilee.

The piece is now set go on sale at the London Film Museum in London's Covent Garden on June 2, auctioneers The Sincura Group said in a statement.

Sincura said that the mural has "been sensitively restored under a cloak of secrecy", and will be "the centrepiece" of the group's latest private art exhibition alongside pieces by Damien Hirst, Andy Warhol, Mario Testino and Russell Young.

But Alan Strickland, a councillor for Wood Green who has spearheaded the 'Bring Back Banksy' campaign since the piece was removed from its original site, said he would fight to prevent the sale going ahead.

"We feel very strongly that this piece was given freely by Banksy to our area, it belongs to the community and it should be returned to Wood Green," said Strickland.

"The sale shows complete disregard for the strength of public feeling.

"We were delighted to stop the sale in Miami and we are determined to campaign hard to stop this sale," Strickland added.

Keith Flett, secretary of the Haringey Trades Union Congress (TUC), said: "The Slave Labour Banksy belongs to the people of Haringey not to a wealthy private client.

"We want the sale stopped and the Banksy back where it belongs in London N22."

Sincura's director Tony Baxter said his group does "not condone any acts of wanton vandalism or other illegal activity" and said that they were "entirely satisfied that the mural was legally salvaged."

There was suspicion that the mural had been stolen when it first disappeared in February but London's Metropolitan Police said there were "no reports of any theft".