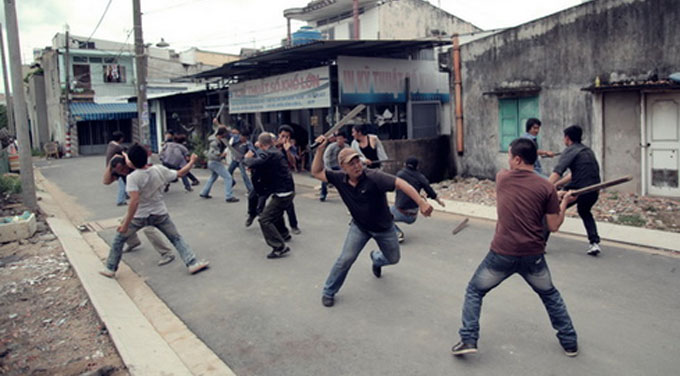 “Duong dua” (The race tracks), a film invested with VND12 bil (US$ 568,000),  to which its producer made ample revisions after its content was assessed by the Motion Pictures Office to be overly gory and violent, is set to join the eagerly awaited ‘film feast’ this summer, but only 16-year-olds and above are allowed in.

Late last year, the office’s assessing board requested that numerous alterations be made to the film, a debut by director Nguyen Khac Huy and co-scriptwriter, producer,  award-winning actress Hong Anh, as it falsely depicts a dark, gloomy society, plagued by gangsters in numerous scenes of gambling, rape, and ruthless killings.

Unlike the producers of “Bui doi Cho Lon” (Cho Lon), who procrastinated and seemingly protested the office’s request for them to make numerous changes to their film, which is also considered excessively gory and violent, the producers of “Duong dua” chose without hesitation to spend three months revising the film and holding unofficial talks with the assessing board for comments.

Their hard work and prompt revisions paid off, they finally earned the permit from the office.

Featuring three actors and no actresses in lead roles, “Duong dua”, along with “Biet chet lien” (I certainly have no idea), a 3D comic-horror film by director Le Bao Trung, will go to the theaters this summer.

“Bui doi Cho Lon”, which is directed by Vietnamese- American director Charlie Nguyen and features his brother Johnny Tri Nguyen and has caused quite a stir and mixed opinions among netizens regarding its bloody content, has been announced on www.galaxycine.vn , its distributor’s official website, to hit the screens on June 18.

However, Galaxy, Chanh Phuong, its producer and the Motion Pictures Office gave no comment on this release date.

As the film makers have yet to submit the revised version to the assessing board for another censorship, they have yet to earn a permit for its release.

Earlier, they didn’t heed the office’s requests for removing bloody, violent scenes twice and went ahead with the filming and production. They also defiantly set the public screening date in April without the release permit.