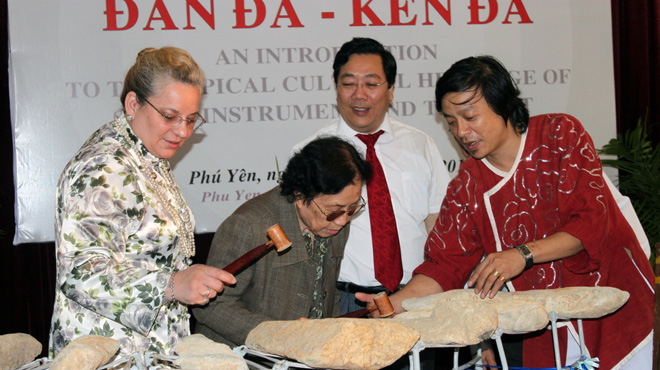 The central Phu Yen People’s Committee on May 15 proposed that the Ministry of Culture, Sports and Tourism recognize the province’s “ken da” (stone horns) and “dan da” (lithophone) as national treasures.

According to Tran Quang Nhat, deputy chair of the committee, the Tuy An horns, considered unique ancient musical instruments, were discovered by locals in Tuy An district in 1994 and given to a local museum.

In 1990, the ancient eight-slab lithophone, considered to boast a comprehensive sound scale, was unearthed at Mot mountain, also in Tuy An district.

These stone instruments all date back to over 2,500 years ago.

Late last year, UNESCO in Vietnam suggested that the province apply for the artifacts to be recognized as the organization’s “Memory of the World” heritage, an international initiative launched to safeguard the documentary heritage of humanity against collective amnesia, neglect, the ravages of time and climatic conditions, and willful and deliberate destruction.

A lithophone is a musical instrument consisting of a rock or pieces of rock which are struck to produce musical notes. Notes may be sounded in combination (producing harmony) or in succession (melody).

The first ancient Vietnamese lithophone was discovered by the French in the Central Highlands province of Dak Lak, followed by the excavation of more in other provinces.