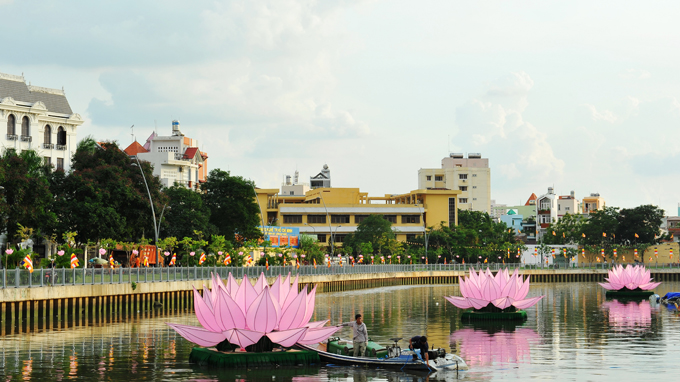 Seven big lotus-shaped lanterns were lighted up on May 17 evening for the first time on the Phu Nhuan district’s ward 2 section of the Nhieu Loc canal, the ‘dead’, seriously contaminated canal which was recently dredged up and brought back to life, to mark the Buddha’s 2557th birthday.

The lanterns, mainly made of cloth and aluminum in the shape of seven blooming lotuses which are symbolic of the Buddha’s seven heels, each measure 3m tall and 5.56m in diameter and have 24 petals arranged into three layers as well as an inner lighting system.

According to nun Thich Nu Hue Duc, head of the Quan Am Convent, which co-organized the event, the lighting celebrates the Buddha’s birthday, represents wishes for good things to happen to the masses, and also boost locals’ awareness in stopping littering and safeguarding the revived canal’s purity and beauty.

The seven lotus lanterns will be kept lighted until after the 15th day (full moon day) of the fourth month in the lunar calendar, which falls on May 24.

A similar event is also held in central Hue city from May 17 to 24.

The event also features a range of activities including singing and painting competitions for Buddhists, Buddhist-themed music performances, incense offerings, and processions to pay homage to the Buddha.