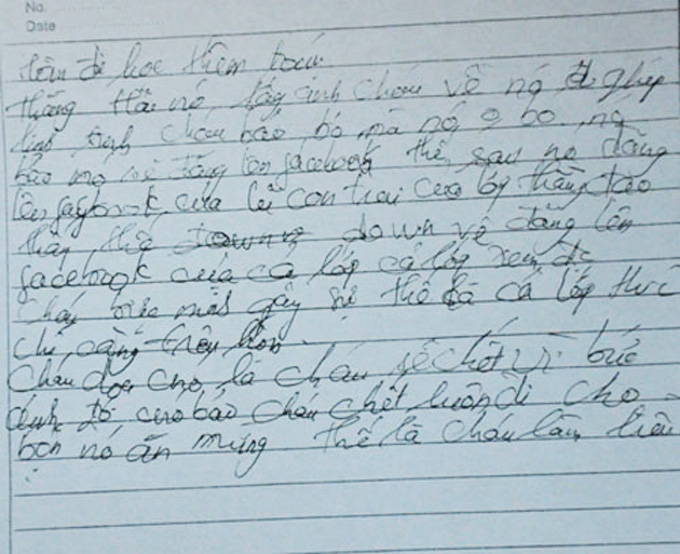 An 18-year-old girl committed suicide on July 1, shortly after failing to ask her former classmate to remove a photo in which he had attached her face to a pretty girl wearing a wide-collared shirt and posted it on a social network.

T. L., who had just finished the 12th grade at Hai Ba Trung high school in Hanoi, took her own life by gulping down herbicide.

According to local police, after H., one of L.’s former classmates, took a photo of L. and merged her face with that of a pretty girl wearing a wide-collared shirt. H. then posted the doctored photo on a social network. L. desperately asked H. to take the photo down, but he refused.

In her suicide note, L. wrote that when she threatened to kill herself if the photo wasn’t removed, H. and some other friends didn’t take the threat seriously, and even dared her to do so.

Deeply humiliated and frustrated, L. bought herbicide and drank it. Though she was rushed to the hospital, L. died anyway.

According to her former head teacher, L. was an introverted, quiet girl.

In Hanoi, several high school girls, fake sex clips and photos of whom were posted on the Internet, have also suffered tremendously.

This has raised concerns regarding parents and teachers’ roles in equipping youths with living skills and getting to know them better so they can help them through such emotional crises.

This is also a disturbing warning to youths who love to make fun of their friends by posting photoshopped, sensitive photos or sex clips on social networks or Facebook status lines.

Many Tuoi Tre readers have expressed outrage at T. L.’s death, with some urging social network owners to develop a function to delete unwanted photos or clips posted by someone else, and calling for legal control against the increasingly rampant posting of malicious, fake photos or clips on social networks.