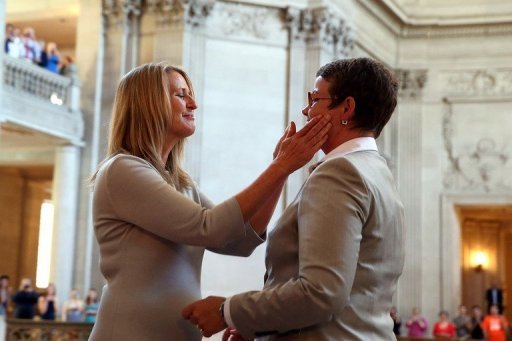 US support for same-sex marriage at record high: poll

WASHINGTON — Support for same-sex marriage in the United States has hit a record high just days after landmark US Supreme Court rulings on the issue, a poll showed Tuesday.

According to a survey published by the USA Today newspaper, 55 percent of participants against 40 percent said they believed same-sex marriages should be recognized as valid, with couples granted the same rights as heterosexual couples.

The only two demographic groups where a majority remained opposed to same-sex marriage were Republicans (68 percent) and people over the age of 65 (51 percent).

The poll of 1,003 adults was carried out between June 27-30 by Princeton Survey Research Associates, with a margin of error of 3.6 points either way.

In historic rulings last week, the Supreme Court struck down a law denying federal benefits to homosexual couples and cleared the way for same-sex marriages to resume in California.

With the addition of California, same-sex marriage is now legal in 13 of 50 US states, as well as in the capital Washington.