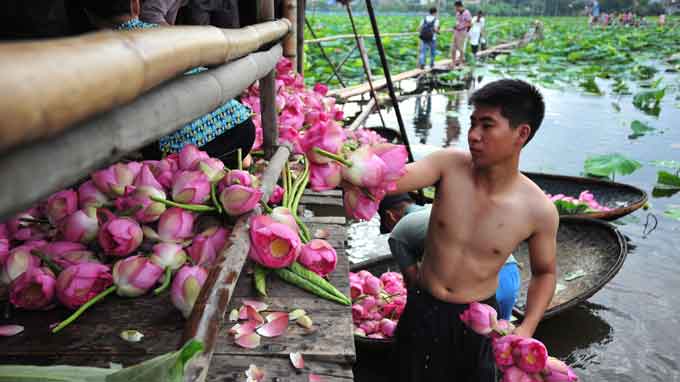 Tay Ho (West lake) lotuses, one of Hanoi’s specialties, which are known for their unique beauty, fragrance, large size and versatility, have become an alarmingly rare sight in the capital city over recent years.

Never before have the Tay Ho lotuses been in such poor bloom as in this year. The flowers on the lakes, which are shrinking due to urbanization, are now considerably fewer in number, smaller in size and poorer in quality.

The shrinkage of Tay Ho lotuses greatly upsets lovers of the flowers, the unique tea fragranced with them and part of Hanoi’s picturesque hallmark scenery which they help create.

The lotuses are usually in full bloom from May to early Sept. However, in the past three years, the lotus season has shortened considerably. Also, one of the six lakes which boasted the lotuses was recently filled up to make room for a sewage treatment plant. The remaining lakes now yield much smaller, less fragrant flowers.

With such a poor crop this year, the flowers’ price jumps from VND4,000 (US$0.2) to 8,000 apiece. With around 7,000 flowers sold each day previously, the supply now is meager, with nice ones being extremely hard to come by.

Tay Ho lotuses stand out from the rest throughout the country thanks to their enormous size and pure, special flagrance. All the parts of the plants have their own uses, including being used in making tea, alternative medicine, wine, sweet soup and as decorative items.

With a kg of Tay Ho-lotus-scented tea fetching between VND5-8 million (up to US$380), its quality is beyond comparison with cheap lotus-scented tea which is readily available on the market.

Doan Hung Tien, who has fallen in love with and studied Tay Ho lotuses for over 30 years since he was head of the Vietnam Tea Research Center, has roamed the country in attempts to preserve the precious breed.

In his retirement years, he has done extensive research on how to best enhance the blend of lotus fragrance and tea during the scenting process by combining traditional methods and modern technologies.