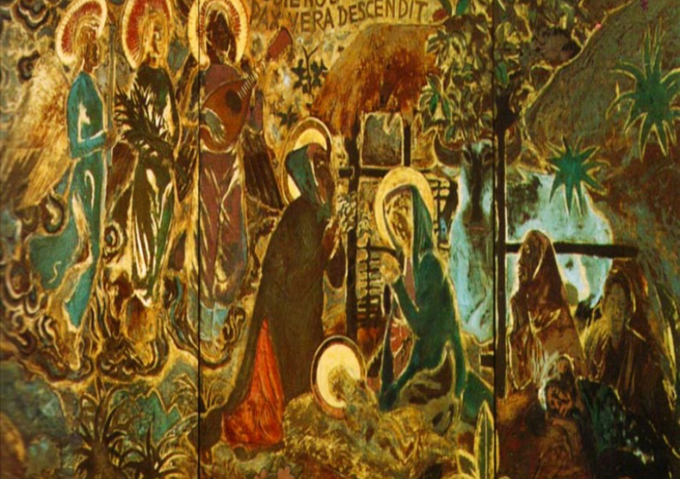 Some of the masterpieces which are considered national treasures by Nguyen Gia Tri (1908 - 1993), one of the country’s most eminent artists, have sustained serious damage and badly need restoration.

One of Tri’s famous lacquer paintings, called “Giang sinh” (Christmas) and currently owned by Mai Khoi church in Ho Chi Minh City, was created in 1941 when some French men placed an order with him. Tri only agreed to create the painting if he could paint the Christ-themed painting with Vietnamese images and traditional costumes.

Priest Thien Cam recalled that during wartime years, the prized painting was in France. In 1958 he saw the painting used as a partition at the French priests’ sink. Not until the 1960s did French minister Bernard Pineau claim the painting back on Mai Khoi church’s behalf and it was hung at the middle of the sanctuary as one of the church’s treasures until recently when it was removed, pending restoration.

In the early 1990s, Tri deputized artist Nguyen Xuan Viet to restore the painting once. But after a long time  being exposed to excessive dust and sunlight, the work has suffered serious damage.

The church staff are at a loss regarding how to fix the damage.

“The most challenging thing is to protect the painting from dust, as the artist didn’t polish the surface but made kind of reliefs on it,” shared priest Cam.

Another painting by Tri titled “Ben dam sen” (By the lotus lake) and owned by artist Bui Quang Ngoc, has also sustained massive damage in its right corner. The painting is among those which art enthusiasts are most after.

Artist Vi Kien Thanh, head of the Department of Fine Arts, Photography and Exhibition, affirmed that Tri’s two paintings are entirely restorable and the Vietnam Fine Arts Museum is capable of the job.

“The restorers, who are fully experienced and able, won’t interfere with the paintings’ structures but only fix their surfaces. But the current painting owners have to make the request first,” Thanh noted.