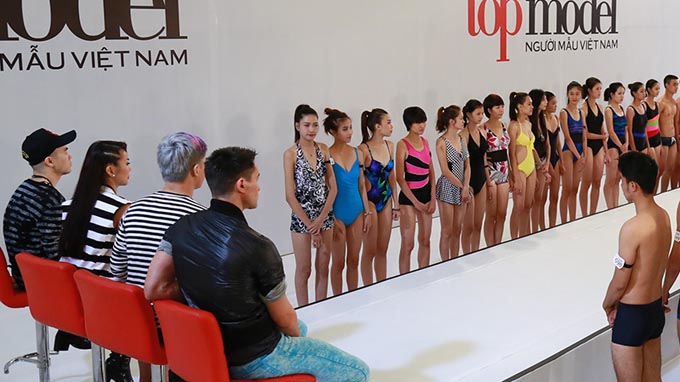 The audition round of 2013 Vietnam’s Next Top Model held in Ho Chi Minh City on Aug 12 and 13 drew an unexpectedly large number of contestants compared to the three previous seasons.

The round, which took place at Grand Palace Convention Center, received around a thousand candidates, who gave their best to impress the jury with their height and physical attractiveness.

The contestant’s quality this season is considered higher than previous ones, with some 80% of the girls being over 1.7m tall. Some girls are up to 1.85m tall while a male contestant set a record in the local show for his staggering 1.94m height.

100 candidates made it through the first round to enter the physique round, in which they donned swimsuits and wore light makeup.

The total prize for the winner of this season’s Vietnam’s Next Top Model amounts up to VND2 billion (US$95,080). The top candidates will also have chances to get trained in Paris.

Like America's Next Top Model, this is the first season its Vietnamese version has given male contestants opportunities to shine.

The original America’s Next Top Model reality show was created in 2003 and hosted by supermodel Tyra Banks. It has seen localized series being produced in over 20 markets including Australia, Brazil, Germany, Russia, New Zealand, Britain & Ireland, Italy, Greece, Mexico, Korean and Vietnam.