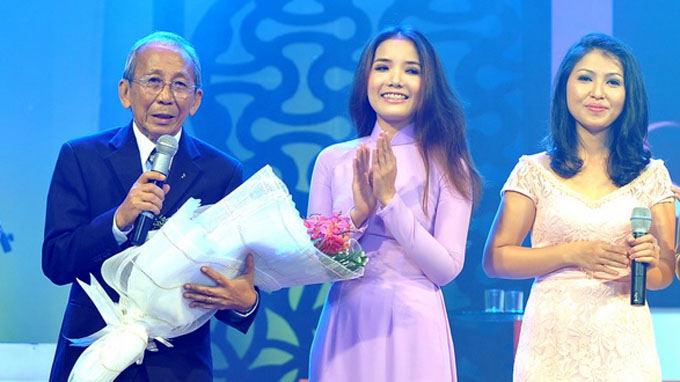 Nguyen Anh 9, a revered 73-year-old composer, has recently been blasted by several of the country’s leading pop singers for his critical comments towards them, while other composers and many members of the public have stood by him.

Nguyen Anh 9, a veteran composer who has always kept a low profile and led a scandal-free lifestyle, critcized several top-notch pop singers, including Thanh Lam, My Linh, Dam Vinh Hung, My Tam and Ho Ngoc Ha in a recent interview with a local newswire.

He was quoted by the newswire as pointing out local divas Thanh Lam’s and My Linh’s technical weaknesses and failure to express the soul of his songs.

“I was really upset when listening to Thanh Lam singing my song “Co don” (Lonely). Though her voice is beautiful, her insipid, soulless performance failed to accentuate the loneliness depicted in the song, and even an amateur singer can outperform her regarding that,” Anh was quoted as saying.

Lam, who is called “The singing lady”, pocketed the “The Favorite singer” award at the 1989 Lahavan Music Festival in Cuba for her performance of “Co don”. In 1991, she won the Grand Prize at the first National Professional Singer Contest.

“My Tam’s singing ability is so-so, her songs and performing styles are fun to listen to and watch, but leaves no impression on the audience,” Anh said about celebrated singer My Tam, who was named the Best Asian Artist at last year’s Mnet Asian Music Awards (MAMA) and recently represented Vietnam at the 2013 MTV EMA.

Anh also stressed that Ho Ngoc Ha, who is wildly loved and has pocketed several local singing awards, has all it takes to be a singer, including attractive looks and fiery dance moves, except for a singer’s voice.

“Ha’s voice is so weak, we can hardly hear her, though she dances really well,” he stressed.

“Several years ago, Hung could only perform when the main singers were late or absent. He was never one of the cabarets’ main singers,” he said about Hung.

“I begged Hung to stop singing my songs, as he fails to sing them properly and depreciates their beauty,” the veteran composer added.

As Anh’s comments instantly went viral, most of the targeted singers were shocked and outraged by what the seasoned composer had said. On fan pages, fans also expressed rage at the harsh words directed at their idols.

Dam Vinh Hung reacted to Anh’s criticisms the most strongly. He wrote on his personal page that he hoped that Nguyen Anh 9 had been ‘set up’ or misled by the newswire reporter into giving such comments. Otherwise, the composer would be fully responsible for them.

“We have always looked up to you, but now after all these comments, you’re no more than a hypocrite. I promise you that I’ll never sing any of your songs again,” Hung wrote.

“Life is full of traps and packed with hypocrites. Someone must have learned PR at the wrong place and applied it with the wrong people, he wants to gain attention and fame in the wrong way,” Hung added.

One day after his remarks spread online and sparked a backlash from the targeted singers and their fans, Anh publicly apologized and said his remarks had been misinterpreted and wrongly worded by the reporter.

“I’ve always been humble about my job and hardly talk about my colleagues, let alone belittle or insult them. I always respect the singers’ individuality irrespective of whether I appreciate it or not, as they all have talent, their own styles and cater to various audiences’ demands.

He added that he only meant to advise Hung to perform his songs at cozy cabarets rather than on large stages.

Anh said he has been frustrated and upset over the past two days.

“Though some people have approved of my constructive remarks, there are also many who blast them as malicious and ill-meaning. The last thing I want is to hurt my colleagues’ feelings, and I bear absolutely no grudge towards them,” the veteran composer shared.

Though Anh’s comments have been criticized, many have also expressed support and approval for what he said. Singer My Tam said that such remarks are the norm in showbiz, and she took them as advice from a predecessor.

Several composers and members of the Vietnam Composers Association also expressed support for the composer’s critiques.

“Anh’s criticisms are sincere, responsible, constructive comments. He only wants the best for our music scene, not to create scandals or brag,” remarked composer Do Hong Quan, chair of the Vietnam Composers Association.

“Anh’s comments are partially correct, but I think there has been a lack of understanding between composers and singers. They haven’t reached a consensus regarding how to perform the composers’ songs. While the composers want their works to fully express their feelings, singers wish to be creative and unique in their performance of the songs,” said composer Cat Van, deputy chair of the association.

“Anh’s opinions, as well as mine should be respected. Such remarks on previously-composed songs and singers and new ones mostly stem from generational gaps,” composer Quoc Trung wrote on a social page.

“I think there’s absolutely nothing wrong with his comments and he didn’t need to apologize. Our singers, like Dam Vinh Hung, should learn how to behave properly. Indulging in overwhelming praise makes them less receptive and even adverse and allergic to criticism,” wrote Tan Quoc, a reader.

“It’s time that singers look closely at themselves and their performances. Anh’s comments spoke for ours, we also think pop music and singers badly need changes and improvement,” another reader said.