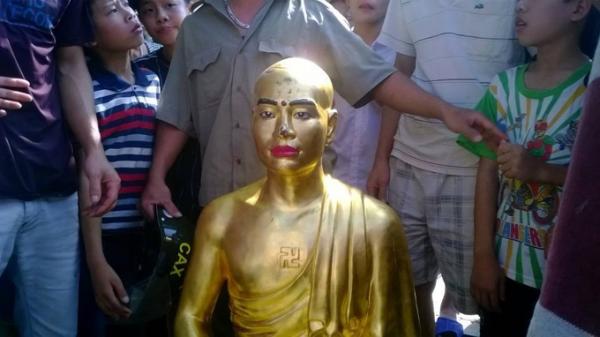 Locals in Hanoi’s Thach That district have expressed outrage at the repeated violations of the head monk of century-old Chan Long Tu Pagoda, a national relic.

The protest of locals in Chang Son commune against Thich Minh Phuong, the pagoda’s head monk, climaxed with their removal of a new statue Phuong had put in place of an ancient statue that had gone missing. Photos and video clips of this act of dissent have been spread on YouTube and social networks since early this month.

The removal of the statue occured in the presence of local officials and hundreds of residents. For several days, they gathered in front of the 300 year old pagoda and the Chang Son commune’s People’s Committee and hung banners in protest of the monk’s wrongdoings.

Locals accused Phuong of disposing of the original 400-year-old statue, said to depict Tran Nhan Tong (1258 – 1308), the third King of the Tran dynasty (1225 – 1400). The King, a Buddhist monk himself, founded the Truc Lam Yen Tu meditation sect and is among the greatest national heros.

Many locals, who include traditional sculpting artisans, insisted that the new statue Phuong brought into his pagoda strongly resembles himself in facial features and posture. The statue looks very much like a large photo of Phuong, which captures him sitting in the contemplative posture and is hung at the pagoda.

Locals expressed their fury with the monk’s rampant violations via their Facebook pages. Many wrote that the antique statue went missing last year and Phuong told the local government that he dumped the statue, which sustained serious damage, into a river nearby.

Also, Phuong has replaced dozens of antique incense burners with new ones without consulting locals. He also built a garage to house his expensive car and a cluster of restrooms right next to the pagoda’s main worship hall.

Empty beer and wine bottles were found inside his room within the pagoda, and a picture of a sexy, half-nude girl can be seen on the wall of his bathroom. The monk also uses luxurious furnishings, perfumed shampoos, and hair-sculpting gels.

Phuong’s other wrongdoings include closing the pagoda gate to keep locals from entering, chopping down an old tree near the pagoda without seeking local opinion, and fundraising without disclosing how the money will be used.

A local woman filed a complaint with the local government, accusing Phuong of physically assaulting her when she tried to help a man who was hit by Phuong’s car in July 2013.

Truong Minh Tien, deputy head of the Hanoi Department of Culture, Sports and Tourism, affirmed on Nov 11 that his department will insist that the district People’s Committee hand over the case of the disappearance of the ancient statue to local police.

Tien added that his department will also request that the district committee deal with Phuong’s violations in accordance with the Heritage Law and discipline those who turned a blind eye to the monk’s repeated infringments.

Locals now demand that the monk return the pagoda’s key to them so that they can go to the pagoda at their own will. They also demand that the missing statue be retrieved and that Phuong be held accountable for his other violations.

“In case the monk can’t return the missing statue, we insist that he not bring in any more replacements, particularly a statue which resembles himself. When the government allows, we sculptors will build another statue ourselves,” said a local.

Many locals now choose not to go to the pagoda, which has been integral to their spiritual life for several generations.

Venerable Thich Bao Nghiem, a member of the city’s Buddhist Association, confirmed that the new statue Phuong brought in is indeed a new version of the original one. But Phuong is wrong in bringing the statue into his pagoda without informing the local government.

The district’s committee has tried to contact Phuong to no avail and the monk has not been seen in the area during the past few days.