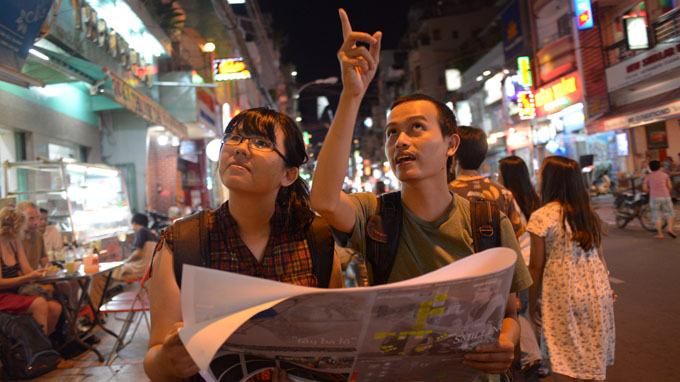 A group of local young architects recently won a Denmark-sponsored competition with their project “Smiling Stop,” which aims to make the backpackers’ quarter in District 1 a friendlier, more appealing destination by making the best of its space.

Roaming the backpackers’ quarter on Pham Ngu Lao and its adjacent streets, Vinh realized that the potential of the quarter hasn’t yet been met. The neighborhood is alive and bustling at night but is quite dull by day. Also, most of the activity occurs on the ground floor of businesses while the upstairs of buildings remain unused.

These thoughts spurred Vinh and his team to come up with a project to improve the quarter, particularly Bui Vien and Do Quang Dau streets.

The highlight of the project is the construction of an aerial sidewalk. Spanning from Do Quang Dau to Bui Vien street, it would be 600-m long and the same width as the sidewalk below. It would be a simple structure made of light concrete and serve as both a second sidewalk and a cover for the street below. It would be covered with shady vines.

“During my trips to the backpacking district, I noticed that several houses on Bui Vien street offer several services upstairs such as cafés and massage parlors apart from the galleries on the ground floor. But it’s quite inconvenient to go past the ground floor to reach the facilities upstairs. If we build the aerial walking street, these services will improve considerably in sales and tourists will also find it much more convenient,” explained Gia Han, a member of Vinh’s team.

The competition’s jury highly appreciated this practical option, as it’s likely that local residents and service providers in the neighborhood will embrace it for its convenience.

According to the team’s project, at intervals the aerial street would be expanded into open stages, which would feature street art performances that the current quarter doesn’t have the proper space to feature.

On Do Quang Dau street, there is a row of buildings that are all about the same height. The team would combine the top floors of these buildings into one large space large enough to house cafes and eateries.

To add grace to the quarter, the streets would be adorned with water fountains shaped like holes left by bombs. Vinh suggested that these curious objects could arouse foreigners’ interest and cause them to lengthen their stay to discover more about the country’s history and beauty.

Vinh, the leader and oldest of the team, noted that urban design is still foreign in Vietnam. Architecture in Vietnam is usually about constructing interiors and exteriors for maximum convenience and utility, while developed countries are now paying more attention to the congruousness and subtlety of urban space.

“This project will retain the identity and originality of the backpackers’ quarter instead of making it look just like other places,” Vinh stressed.

The 2013 CDEF Talent Competition, themed “Architectural Solutions to Urban Space”, attracted a large number of youths under 35 years old who are passionate about architecture. Along with the first prize, Vinh and his team also earned a trip to Denmark to study architecture further.

If the proposal to add an aerial sidewalk to the backpackers’ quarter is approved, Vinh’s project would be a viable option to be considered by the city.

Earlier this month, Vinh and his team pocketed third prize in a competition to design a lighting system for the city with their project proposing how to decorate Le Duan street for the 2014 Tet holidays.

Vinh is now full of ideas to renovate the Chinese quarter on Hai Thuong Lan Ong Street in District 5, which is lined with traditional Chinese medicine stores. He joked that if he devises a project in the quarter, it’s important that his project retain the distinctive scent of the pervasive medicinal herbs.