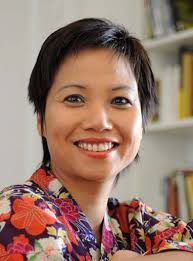 The ‘matchmaker’ of VN literature and the Francophone community

Thi, who earned a PhD in France and is currently an associate professor at the Institut National des Langues et Civilisations Orientales (INALCO) (National Institute of Oriental Languages and Civilizations) in Paris, is one of the founders of the Vietnamese literature collection in Paris, which is funded by France’s Riveneuve Publisher.

Since its foundation in Oct 2012, the publisher has published four novels by Vietnamese expats, including “Khmer Bolero,” “T. a disparu,” (T. has disappeared) and “Une opportunite pour Dieu” (An opportunity for God), which were originally written in French and authored by Do Khiem, Thuan, and Nguyen Viet Ha respectively. The works were enthusiastically embraced at the high-profile Paris Book Fair held in March 2013.

They are looking to release “Delete” by authors Phong Dien and Nguyen Viet Ha in Paris early this month, along with several more works in 2014.

Thi doesn’t think that she’s alone in her pursuit of promoting Vietnamese literature to France and the world.

“In today’s globalized world, many countries wish to ‘export’ their cultures. Organizations such as the Toyota Foundation, the Korea Foundation, and the Daesan Foundation have come up with strategies to help French publishers translate and promote their authors’ works,” shared Thi.

She added that while waiting for the Vietnamese government’s efforts, she and several others have taken the matter into their own hands and called for assistance from organizations in France and the Francophone community in general.

“Three thirds of the current Vietnamese population was born after 1975. Local writers of this generation yearn to write novels, which are more technically challenging and have been traditionally outnumbered by short stories. However, more of these writers have switched to the genre in recent years. Their choices of topics and their writing styles are a far cry from those adopted by their predecessors. My job is thus to introduce them and their pieces to French readers,” the 46-year-old researcher and translator elaborated.

Thi hopes that the Vietnam Year in France 2014 will serve as a lever to boost the promotion of local authors. She noted that several book fairs in France, including L’Hay-Les-Roses and important cultural destinations such as the INALCO, Université Paris Diderot - Paris 7, Aquitaine, and Le Grand Palais museum will highlight Vietnamese literature as one of the country’s great cultural values in the future.

According to Thi, she and her group tend to pick Vietnamese works that boast creative writing styles and unique perspectives. The works explore the artistic values that their predecessors tend to overlook. They depict the world as it is, not as it should be. The ‘ego,’ once condemned, is now a popular theme in today’s works.

Thi’s group also selects outstanding French works by contemporary authors including P.Deville, M. Duras, and M. Houellebecq and translates them into Vietnamese. She edited the Vietnamese version of the novel “Yersin – Peste et Cholera” (Yersin – Plagues and Chorela) by P. Deville and released them in Vietnam late last month.

“I really hope that one day, Vietnamese and French authors can sit down and share their experiences. Many of our literary works are as good as those around the world. I’m just afraid that in the future we may not have enough resources to go on,” Thi stressed.