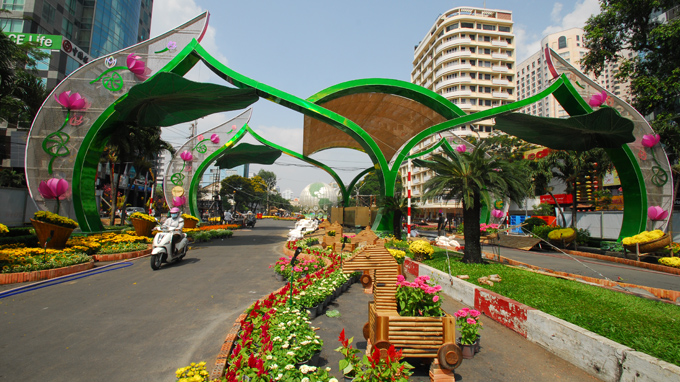 Among the many taboos and rituals connected with the Lunar New Year in Vietnam is xong dat, or “first-footing” as the Scots call it.

It is a deep-rooted belief that the first person to enter a house at the beginning of a lunar year will have a bearing on the family’s fortune throughout that year. Thus, the rich and popular are usually invited to get into a home at that time.

Traditionally, the first visitor hands out li xi, or lucky money, and New Year gifts to the hosts and seldom stays longer than a few minutes. This is to ensure that things do not get “stuck” in the new year.

But like many other traditions, xong dat too has evolved into a personal belief without a strict interpretation. It is altered to suit each family and varies according to each region.

What has remained unchanged is the fact that a person who can bring luck should be the first-foot.

The flip side is that Vietnamese are chary of visiting anyone’s house early on New Year’s Day for fear they may be held responsible for any possible misfortune.

“I still remember the year when my husband suffered from a serious illness and passed away,” an elderly woman in Tan Binh District, Ho Chi Minh City, said.

“An unwanted guest visited us in the early morning of the first day and I cannot help recalling that experience.”

Who will bring luck?

There are several important qualities a family will look for to find their first-foot: The person’s zodiac sign is the most common, especially in the northern and central parts.

According to the Vietnamese zodiac, each year – and a person born in that year – is represented by an animal in a cycle of 12 signs. The hosts ask a fortuneteller to identify the animal – among rat, water buffalo, tiger, cat, dragon, snake, horse, goat, monkey, rooster, dog, and pig – that is luckiest for a particular year and themselves.

But in other families, sign compatibility is not a big deal.

“I don’t look at the person’s sign. As long as the person is good, healthy, and cheerful, I am fine,” the elderly woman in Tan Binh District said.

“I would even prefer a family member who I can trust and know well rather than some distant relative, even if he or she has the right zodiac sign. I want to make sure of my family’s luck.”

First-footers also need to have a bright and cheerful disposition, good health, career success, and a happy family, things people normally aspire for in the new year.