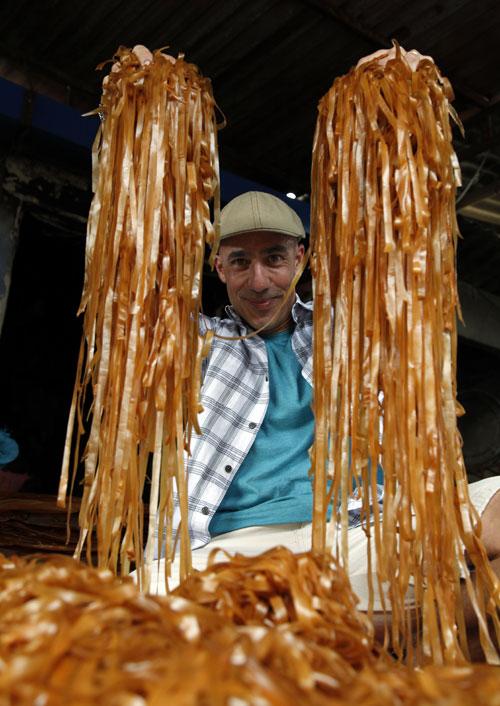 US chef ‘addicted’ to Vietnamese cuisine

US chef Robert Danhi, an instructor at the Culinary Institute of America and an authority on the cuisine of Southeast Asia, has visited Vietnam seven times and is spellbound by the country’s gastronomy.

During his seven tours across Vietnam, which lasted from a few months to half a year, Danhi became particularly engrossed in the cuisine he tasted and the stories he heard.

In 2000, the head of the New York-based Culinary Institute of America suggested that Danhi design a course on Vietnamese cuisine, but Danhi turned down the suggestion, as he had never visited Vietnam. He believed that a chef can imitate a country’s cuisine only when he thoroughly understands the country and its food.

Danhi made his first trip to Vietnam later that year. He traveled across the country, roaming remote areas and living a rustic life. Captivated by what he saw on his travels, he returned to Vietnam 6 more times.

Danhi also joined the “Go Eat Give” program, initiated by a NGO. He taught deaf people how to cook, giving them useful skills to earn a living. From that experience, the expert realized that cooking isn’t just about making good and aesthetically pleasing food.

Danhi shared that the question he finds most difficult to answer is “In your opinion, which is the most delectable Vietnamese dish?”

“Over the past 13 years, I’ve tried some hundred Vietnamese delicacies. I have learned that even with the hugely popular “pho” (noodle served with beef or chicken), people in different regions have their own ways of seasoning, cooking and appreciating it,” Danhi elaborated.

However, he cited “bun thit nuong” (rice noodles served with grilled pork and/or spring rolls) as his favorite Vietnamese dish.

The expert explained why he enjoys the dish so much. The grilled seasoned pork is unique in its taste and aroma, and is especially delicious when grilled over charcoal. Also, the dish is eye-catching, featuring an array of colors: green vegetables, brown pork, white rice noodles, red chilies, and pickled carrots, which together symbolize the “ngu hanh” (the five basic elements according to Eastern philosophy: metal, wood, water, fire, and earth.)

“I’ve been to many places the world over, but few delicacies hold such special meaning and taste as good as “bun thit nuong” does,” Danhi noted.

One day in late 2013, the American chef crossed hundreds of kilometers in precipitous terrain to Sung La Valley in northern Ha Giang province. The temperature was 9 Celsius degrees.

After his hosts approved the dish, he invited the local children to try it.

“The kids really loved my dish, which brought me to the verge of tears. I felt I was cooking for my own children,” Danhi shared.

He also visited a Lo Lo ethnic minority woman in the province’s Lung Cu commune to learn how to make the people’s signature corn wine.

Though Danhi doesn’t drink, he took several sips of corn wine as he didn’t want to upset his hospitable host.

On the way across the country, Danhi asked to stop from time to time so that he could take snapshots of the stunning landscape and rustic dishes.

He recruited a Vietnamese student who was studying in Malaysia to interpret for him during his journeys, as he particularly loves speaking with locals about their lives and recipes.

Danhi said that in his cozy kitchen in the US, he loves to prepare his bread with Vietnamese pork, bologna, and liver paste in the style of Vietnam’s banh mi.

He has turned down several tempting offers to work with prestigious restaurants and hotels in order to have time to travel around the world.

He is the only cuisine expert to be selected by Taylor's University in Malaysia to initiate projects at the university’s Asian Food Center.

Danhi is currently working on finding a way to minimize the amount of sodium in Vietnam’s “nuoc mam nhi” (protein-rich fish sauce), an indispensable seasoning and condiment in most Vietnamese dishes.

For this project, Danhi will likely return to Vietnam several more times.