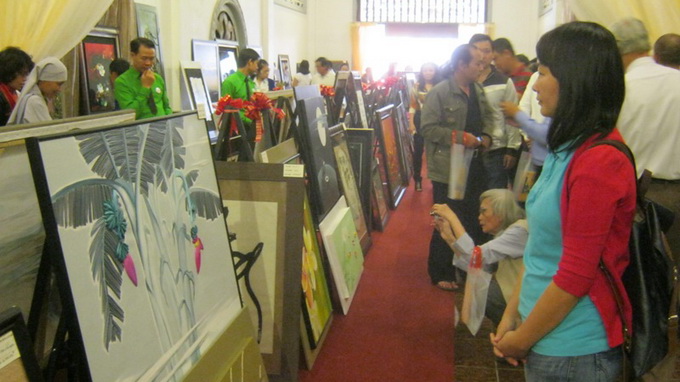 Some 300 works, including traditional art and Buddhist-themed paintings, photos, sculptures and antiques by almost 30 local and foreign artists, are being showcased at an exhibit called “Xuan Dong Phuong” (Oriental spring), which is running in Ho Chi Minh City until Feb 13.

Among the art works showcased at the exhibit, which is going on at Pho Quang Pagoda, 64/3 Pho Quang, Tan Binh district, are a number of famous oil and calligraphy paintings and invaluable antiques.

The exhibit also features a famous painting of Venerable Thich Quang Duc, who is considered a Bodhisattva by locals after setting himself on fire and perishing at a crowded intersection in Saigon (HCMC today) in June, 1963 as an act of revolt against the then government’s repression of local Buddhists. The painting was created by Nguyen Gia Tri, one of the country’s most revered artists.

Also on display are works by Vietnamese-French artist Robert Mihagui.

The exhibit also boasts activities which vividly re-create the country’s Tet customs and fests including poem reciting and calligraphy competitions.

The event has drawn some hundreds of clergy members and Buddhists. Its opening was also attended by the Indian Consul General in HCMC and reputable traditional music researcher Tran Van Khe.