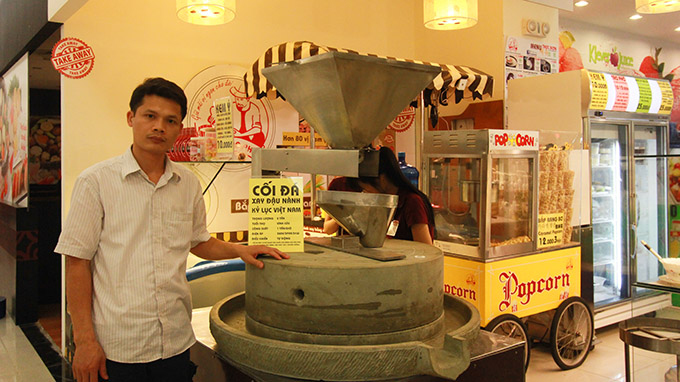 The ‘Tofu King’ in Vietnam’s capital

A man in Hanoi has started a successful business out of “tao pho” (tofu in sweetened soup with/without ice), a popular snack in Vietnam.

“Tao pho,” or “tau hu nuoc duong,” is fine tofu served in sweetened soup and/or coconut extract and slices of ginger. Cubes of ice can be added to make the snack an inviting refreshment in summertime.

The goody, believed to originate from China, was most popular in rural Vietnam, but has grown to be one of the most loved snacks in cities now.

A university graduate in foreign trade, Son, who hails from northern Vietnam’s Hai Duong Province, is set on establishing a successful business in Hanoi. During his initial years after graduation, he worked with a company which distributes kits to make soy milk.

“‘Tao pho’ is a nutritious, cheap snack. I would have a sizzling, fragrant bowl of ‘tao pho’ whenever I went past an alley selling the delicacy,” Son shared.

In late 2009, the man began to research his cherished goody extensively.

In early 2010, Son launched his first shop of “tao pho” and soy milk in the Vinh Ho residential area in Dong Da District.

To draw customers during the first two months, he gifted his products to his neighbors or anyone introduced to his shop for free.   His neighbors then insisted that he sell them and so his first “Vua Tao Pho” shop officially began operation.

On the launch of all his eight shops, lucky customers were treated, free of charge, to soy milk, tofu and “tao pho” for around a week.

One of the milestones in Son’s career is his invention of an electronically-operated stone mortar.

His experience working with imported soy milk makers cemented his knowledge and inspired him to create his own invention.

Son realized that grinding soy beans in a stone mortar produces the best-quality product as the mortar which is revolving quite slowly can reduce friction and thus fully retain the nutritional value of the beans while keeping them from ripening during the grinding process.

The young man then began to build his own mortar, which has given his soy milk and “tao pho” a unique flavor and richness.

His eight shops in Hanoi now all depend on his four mortars for supplies.

Learning from other local food shop chains such as Pho 24, VietMac Rice Burger or Banh Mi Viet (Vietnamese bread) in Ho Chi Minh City, Son is fully armed to cope with the current economic stagnancy, his shortage of capital and the foray of foreign food chains such as McDonald’s, Pizza Hut and Burger King.

“We focus on Vietnamese clients for now. Our high-quality products along with services such as online transactions, home delivery, and supplying bulk orders are giving us quite a good competitive edge,” Son shared.

“Vua Tao Pho” products have made their way to large shopping malls such as Parkson and Lotte Mart as part of his long-term strategy, though sales at these places remain modest.

Son has cherished his dream of developing his “Vua Tao Pho” chain into something like Burger King and McDonald’s, to equalize a local, rustic snack with foreign fast food in regards to popularity.

He has received several franchise offers, but he’s set on running his own chain until he finds a trustworthy partner to entrust it with.

“Apart from doing business, I also love to tell my two young daughters my life story as a ‘tofu king’ and hopefully they’ll follow in my footsteps to better promote this delectable local snack,” Son said.