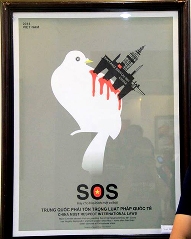 An American art historian and photographer specializing in Chinese art and cinema has purchased a painting by a Vietnamese artist to express her support for Vietnam’s sovereignty over Hoang Sa (Paracel) archipelago in the East Vietnam Sea, in which China has illegally deployed an oilrig since early May.

At the event, Joan Lebold Cohen, an art historian on and author of several books about Chinese art and culture, bought a painting by local artist Nguyen Giang Anh as a gift for her husband, who is an expert on Chinese and international laws.

Cohen lived in China for more than three years, working as an art historian, photographer and curator.

Despite her infatuation with Chinese culture and art, she and her husband are adamantly supportive of Vietnam’s sovereignty over Hoang Sa and critical of China’s illegal deployment of the Haiyang Shiyou 981 drilling platform in Vietnam’s sea.

The painting Cohen bought depicts a white dove – the symbol of peace – being pierced by a Chinese drilling rig.

Cohen highly appreciated the painting for successfully conveying peace messages as well as depicting the damage Vietnam has sustained as a result of China’s illegal act.

Cohen was a lecturer at Tufts University/School of the Museum of Fine Arts in Boston for 22 years.

She is also a research fellow at Harvard University's Fairbank Center for East Asian Studies.

This is her first trip to Vietnam.

The exhibit is also set to run on Con Dao Island off southern Vietnam’s Ba Ria- Vung Tau Province starting July 25 before being taken to other provinces and cities including Can Tho and Binh Duong, where it will run until the end of the year.

Beijing has illegally placed the Haiyang Shiyou 981 drilling rig in Vietnamese waters of the East Vietnam Sea since May 1 despite vehement opposition from Hanoi and wholehearted support for the Southeast Asian nation from other countries.