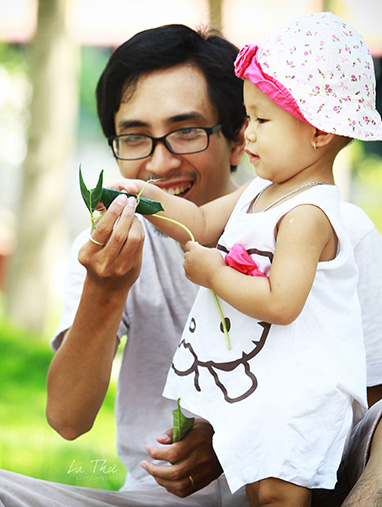 A young man founded the country’s first human milk bank to help provide disadvantaged infants across Vietnam with full access to breast milk as well as to raise awareness of the immense benefits of breastfeeding.

Tuan, now 30, lost his wife due to post-natal complications when Un, his daughter, was only eight days old in 2012.

“My wife’s death was such a devastating blow. I held back my tears when I saw my eight-day-old baby crying of hunger and sucking her fingers instead of sucking milk from her mother’s breast. Luckily, some of my friends had asked for frozen milk from the breastfeeding women they knew,” Tuan recalled.

With Un finishing up the milk fast, his friends kept asking for more from breastfeeding women on some online forums.

“There were times when I looked everywhere for milk when my baby drank a lot, but at other times, my two fridges were overloaded with milk as she drank little. Then I thought of launching a network for mothers to store and share their milk to avoid redundancy or shortages of milk,” Tuan shared.

The man was urged even more to turn the idea into reality when he visited an overdue infant.

His poor single mother could not afford delivery fees, thus the infant stayed in her womb for some 10 days past the due date until she was rushed to hospital for emergency.

As the amniotic fluid had run out, the baby’s skin dried abnormally and flaked off. His skin changed from red upon birth to black some days later.

Though the mother had abundant milk, she fed her baby with bottled milk as she was busy working.

Tuan tried to persuade her to breastfeed her baby for as long as possible, but he was not sure she would do as suggested.

That night, he shared his idea of forming a milk bank on Facebook and received unexpectedly enthusiastic support from a large number of breastfeeding netizens.

Tuan then found out that such a milk bank had been launched in Europe and the U.S. a long time ago, and more recently in India, China and the Philippines.

He also discovered a stark truth that the rate of breastfeeding in Vietnam is less than 20 percent and is among the world’s lowest, compared to 65 percent in Cambodia and 40 percent in Asia in general.

Initially, many women were concerned that frozen breast milk would be unhygienic and unhealthy.

Tuan then reassured them with convincing information from reliable sources, his own and others’ stories of feeding healthy babies with frozen milk.

With his counseling, many women have now started storing their milk for their own babies to use when their milk runs out, and sharing their milk with motherless infants or mothers with no milk.

He also provided useful tips on how to store breast milk properly and care for infants.

Cyber Agent Ventures, Inc. has provided Tuan with an office to run his “Human Milk for Human Babies Vietnam” project.

Last month, Tuan and his friends launched the software BabyMe, which records any relevant occurrences or events during the 1,000 days from the start of pregnancy to when the babies turn two years old.

The software also offers medical assistance through text messages for rural women and through smartphone mobile apps for urban women during the 1,000-day period, which is integral to a baby’s mental and physical development, and is also when infants are most vulnerable to disease and malnutrition.

The young father now seeks solace from his daughter, who is 18 months old and still thriving on the milk from her father’s breast milk bank, and the healthy growth of numerous babies who benefit from his project.