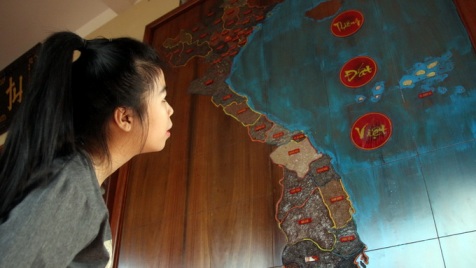 A local artisan on Friday showcased his three maps created with the soil fetched from war veteran cemeteries in 63 cities and provinces the country over.

To make the three maps, 60-year-old artisan Vo Van Hai, of Dak Lak Province in the Central Highlands, fetched the soil from all war veteran graveyards throughout the country, including Hoang Sa and Truong Sa Archipelagos, in the past three years.

Starting in late 2010, Hai spent his own money to get to the cemeteries on his bike.

In 2012, running out of money, he and his wife had to sell their house in the downtown area and bought another in a remote area to fund his trips.

After fetching the soil, he dexterously kneaded it into the S-shaped Vietnamese maps.

“The remains of a number of war martyrs can’t be found until now. So what I did is creating the Vietnamese maps with the soil which is symbolic of their souls in recognition of their massive contributions to the country, while arousing patriotism among today’s generations at the same time,” Hai shared.

One of the three maps will be displayed at Hoa Lam Pagoda in Dak Lak Province’s Buon Me Thuot City, while another will be showcased at the provincial museum before being moved to the Hung Temple in northern Vietnam’s Phu Tho Province, which worships Hung Kings, the country’s founders.

The other map will be presented to soldiers in Truong Sa Archipelago off central Khanh Hoa Province.

Hai is also known for his 60 cm x 80 cm, 81kg book called “Ngoan Thach Vi Anh” (Spectacular Stone), which set a Vietnamese record for being the country’s largest book with its covers made from an almost 1m3 of coffee plants’ gnarls.

The book also featured 243 paintings which were printed on traditional “do” paper.