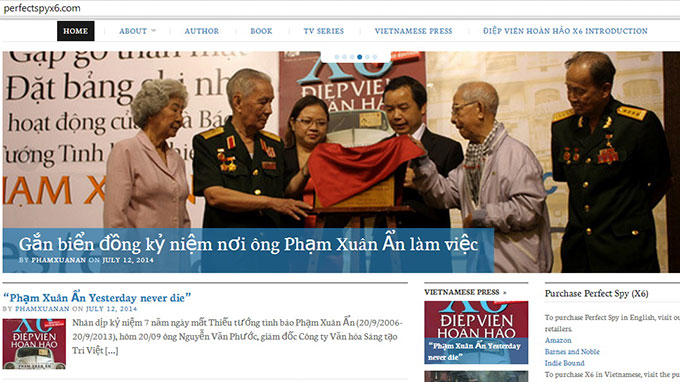 An American historian who authored a book on Vietnam’s famed spy Pham Xuan An has launched a website in both English and Vietnamese out of his reverence and emotions for the late intelligence general.

On his website, Prof. Berman provides loads of intriguing information in Vietnamese and English and photos on General An and his book on the eminent spy.

He also gathers and posts articles on An and shares authentic talks between the intelligence general and himself during the process of writing his book.

The letter written by Thu Nhan, General An’s wife, to Prof. Berman, can also be found there.

The English versions of Prof. Berman’s first book and his revised edition on General An have been published in the US and several other countries.

The American professor also worked with local book publisher First News on a 32-episode TV series on General An, with each episode being some 45 minutes in length.

The film, which costs some US$1 million, will be shot in Vietnam and the US, with the script being revised by the professor himself. The first episode is expected to air on Vietnam’s National Day, Sept 2, 2015.

Prof. Berman is also working on a 120-minute feature film on the general, “Diep vien hoan hao X6” (The perfect spy X6), and hoped the film will be screened at the Academy Awards or Cannes Festival, to let the world know about the brilliant Vietnamese spy.

General An himself recounted his eventful, thrilling spy life to Prof. Berman, who recorded it and first wrote and published his book in 2007.

Six years later, Berman made significant additions to his publication, including astoundingly intriguing facts and details on An’s life, which he recorded but didn’t include in his first edition.

Pham Xuan An (1927 – 2006), also known by ‘X6’, ‘Hai Trung’ or ‘Tran Van Trung’, worked in South Vietnam as a reporter for Reuters, TIME magazine and the New York Herald Tribune during the Vietnam War, while at the same time spying for North Vietnam.

An lived this dangerous double life for more than twenty years. After the war, he was conferred with the title ‘Hero of the People's Army’ and promoted to general - one of the country’s only two intelligence officers to achieve that rank.

Prof. Berman, founding dean of the Georgia State Honors College and winner of the Bernath Lecture Prize, has written several books on the Vietnam War including “Planning a Tragedy: The Americanization of the War in Vietnam” and “Lyndon Johnson's War: The Road To Stalemate in Vietnam”.