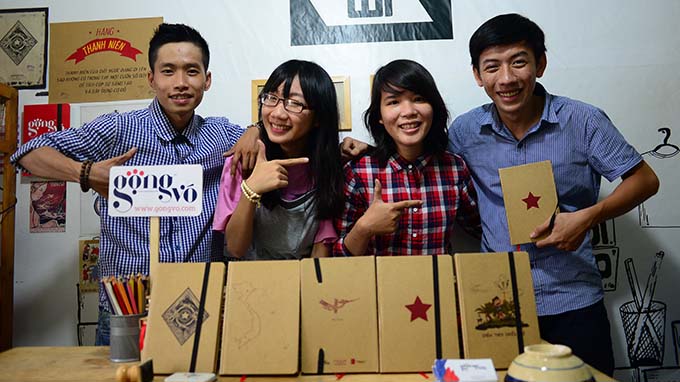 Some local youths have created handicraft items and artwork inspired by their favorite characters in an eminent Vietnamese author’s most loved children’s book.

The characters come from To Hoai’s “De Men Phieu Luu Ky” (Adventures of a Cricket), which was first published in 1941.

The book has been printed in 37 languages and is popular in many countries throughout the world.

To Hoai is the pen name of Nguyen Sen, who passed away early last month at the age of 94, leaving behind a legacy of more than 100 artistic works of different genres that influenced several generations, including short stories, long stories, memoirs, film scripts, and critical essays.

The books are manually created and feature eye-catching images of the animal characters from Hoai’s storybook “De Men Phieu Luu Ky,” including the cricket, ladybird, crane and frog.

The group also features Vietnamese symbols on their notebooks, such as the five-pointed star on the national flag and patterns from bronze drums, a cultural icon.

Contained in a bag made from coarse fabric, each notebook is accompanied by a traditionally crafted terracotta bowl. “We aim to make the most of our traditional heritage and create exquisite, valuable items in a modern way. We also nurture the ambition to replace local youth’s fondness of ‘manga’ (Japanese comics) and foreign entertainment elements with passion for our pure Vietnamese images such as the animal characters from Hoai’s book,” shared Tran Linh Tam, the group leader.

Inspired by Italy’s famous Moleskine notebooks, which boast an expandable pocket inside the rear cover, the Gong Vo rectangular notebooks are bound in coated paper cardboard and have rounded corners, an elastic band to hold the notebook closed, a sewn spine that allows it to lie flat when opened, as well as a ribbon bookmark.

The group also gets its quality paper from Indonesia, China and Japan and make sure they are extremely soft, smooth and acid-free.

“We are startled that today’s youth have taken note-taking in our conventional notebooks for granted, which is an integral source of feelings and creativity. We rely unduly on our electronic devices and smart tools in the fast-paced world,” Tam explained.

The bowl accompanied with the group’s notebook is also indicative of this notion: taking notes in notebooks should be performed as frequently as having meals.

The group has held several community programs such as “Hang Thanh Nien” (Youth Products) in January 2014 in District 7, Ho Chi Minh City, giving away their notebooks for free and selling them at only VND20,000 (US$1) to 500 young locals to spread the group’s message of notebook use.

Several companies have placed bulk orders with the group.

Five years ago, Phu switched from his job as a restaurant manager to start afresh and begin his studies at the Ho Chi Minh City University of Fine Arts.

His alphabet font comprises 26 letters and 10 numbers which depict the cricket, the story’s “protagonist,” and the animals he met during his adventures.

For example, Phu’s letter A is stylized with an ant and its burrow.

“I’ve loved the story and its cute animal characters since I was a kid. So I stylized them and their fairy-like world into an alphabet font which is laden with Vietnamese traditional elements,” Phu shared.