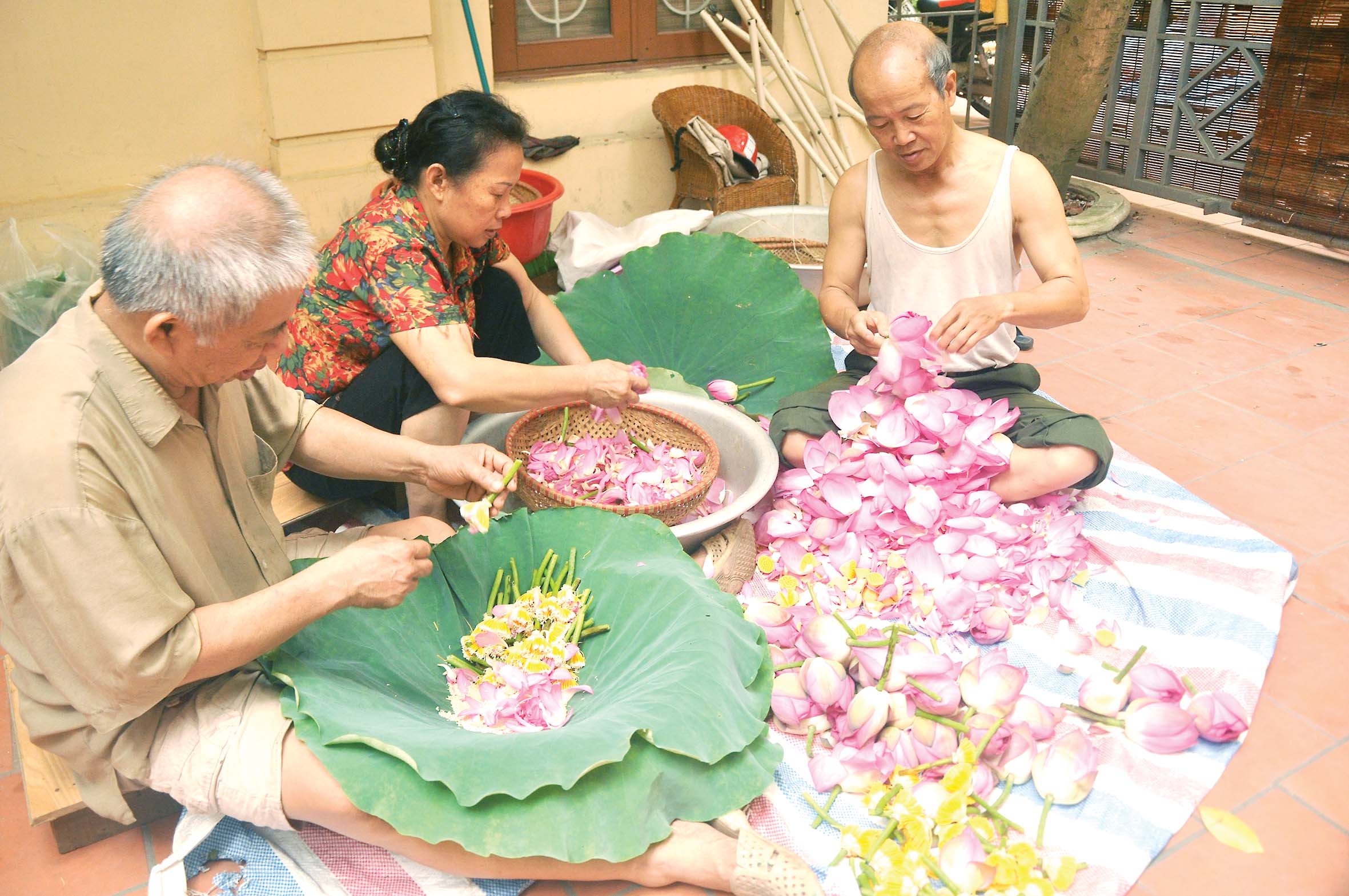 The worrying decline in the number of tea embalming artisans is mostly due to the shrinking lotus-growing areas in Ho Tay (West Lake), which spans Tay Ho, Ba Dinh, and Tu Liem Districts.

Ho Tay lotuses, one of Hanoi’s specialties, known for their unique beauty, fragrance, large size, and versatility, have been on the decline at an alarming rate in the capital in recent years.

Never before have the Ho Tay lotuses had such poor blooms as this year.

The flowers on the lake, which is shrinking due to urbanization, are now considerably fewer in number, smaller in size, and poorer in quality.

The lotuses are usually in full bloom from May to early September. However, over the past few years, the lotus season has shortened considerably.

Lotus growers have also begun using their flower fields for tourism, as more urban youths and visitors like to pose for photos amidst the flowers.      The diminishing art

Ho Tay lotuses stand out from those grown elsewhere in the country thanks to their enormous size and pure, special flagrance.

However, with limited access to the lotuses, many of Hanoi’s tea embalming artisans have had no choice but to give up on their long-standing craft, which has been passed down over several generations.

In previous lotus seasons, more than ten households in Tay Ho District’s Quang An Ward practiced the art, but as of this year, only one remains devoted to the craft.

Ngo Van Xiem, one of the area’s longest-standing tea embalming artisans, lamented that a few years ago, lotuses were abundant and easy to choose from.

Now he has to buy nice flowers, which are increasingly limited in number, at much higher prices.

According to Xiem, most local artisans prefer to embalm their tea with Ho Tay lotuses, as their fragrance is unique and goes well with Tan Cuong tea, one of the country’s premium brands.

Embalming tea with lotus scent is a time-consuming process.

Nice, large lotuses must be picked from the lake before sunrise, as sunshine diffuses the scent.

Tea embalmers then remove the petals so they can access the seeds at the top of the flowers’ stamen.

They then alternate each layer of tea with a layer of seeds. The embalmed tea is later dried with a special kind of coal and stir-fried to retain the lotus aroma for as long as possible.

A kilogram of tea needs about one kilogram of lotus seeds, or 1,300 to 1,500 flowers. The embalmed tea is ready for use about two weeks later.

With a kilogram of Ho Tay-lotus-scented tea typically fetching between VND5-8 million (up to US$380), its quality is beyond comparison to cheap lotus-scented tea, which is readily available on the market.

“I now plan to grow Ho Tay lotuses in Tu Liem District, where the soil is similar to that of West Lake, one of the city’s icons. I’ll pass down the tea embalming craft to my daughter,” Xiem shared.

Le Thi Ngoc, who is in her 60s, is part of the fourth generation in her family to practice the art.

In 2004, TBS, a Japanese broadcasting group, featured Ngoc handing down her lotus-scented tea embalming skills to Japanese actress Nakagoshi Noriko in a documentary.

She has a number of expat Vietnamese and foreign clients who place orders for lotus-scented tea with her.

Despite the enduring popularity of lotus-scented tea, the tea embalming craft is on the brink of 'extinction.'

A few years ago, Hoang Anh Suong, 41, who inherited his father’s famed Truong Xuan tea brand, purchased a lotus area in the lake for his own supply of flowers.

He said that a number of people now choose to buy lotuses, put a pinch of tea inside, and tie the petals up for a few days to make their own lotus-scented tea.

Lotus pond owners have also taken advantage of the opportunity, selling flowers with tea inside for VND50,000-80,000 ($4) apiece.

However, Suong noted that this makeshift method of creating lotus-scented tea does not make the most of the flowers’ fragrance, and can also be unhealthy if stored in a refrigerator.

The artisan is now working on a project to better promote his specialty tea embalmed with the Ho Tay lotus scent to foreigners.