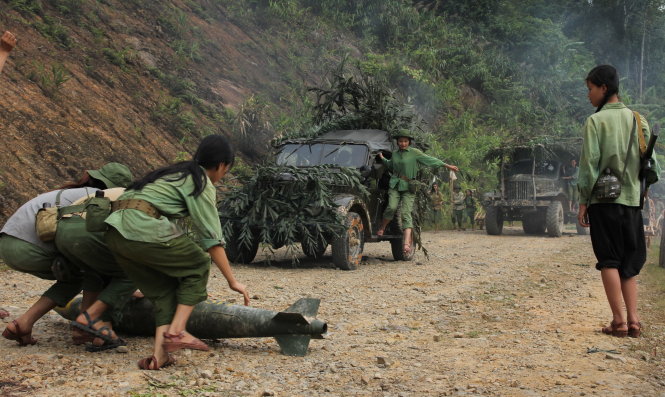 Several state-funded Vietnamese historical films, which have cost up to almost US$1 million each, are still not appealing to audiences, particularly young people, and thus fail miserably at the box office.

Most historical films, which are ordered and funded by the state, have been devastating failures in terms of ticket revenue, though some of them have received critical acclaim.

A few have not even sold a single ticket for certain screenings.

“Song Cung Lich Su,” which marks the 60th anniversity of the Dien Bien Phu victory in May 1954, one of the country’s most important wartime milestones, cost VND21 billion (US$988,421) from the central coffers.

The film revolves around a group of youths who travel to Dien Bien Province in northern Vietnam, and then happen to relive the glorious moments of the Dien Bien Phu battle.

The Battle of Dien Bien Phu was the climactic confrontation of the First Indochina War between the French Union's French Far East Expeditionary Corps and the Viet Minh revolutionaries. The French were defeated on May 7, 1954.

Before hitting local cinemas, the film was screened to local students during the Free Film Week nationwide in late April.

According to representatives of the National Cinema Center under the Ministry of Culture, Sports, and Tourism, “Song Cung Lich Su” has done poorly at the box office since its debut on August 29.

Though the center screens the film at peak hours and its tickets cost less than those for other films, screenings are often canceled due to lack of demand.

The center has sold only a few dozen tickets during the past two weeks.

Kim Dong Cinema in Hanoi has not been able to show the film a single time, as there were only two or three viewers each session.

Its director, Nguyen Thanh Van, said that it took one year and 300 actors and extras to complete the film.

He put his flick’s failure down to unprofessional promotion and local audiences’ preference for other film genres over historical works.

Van noted that of the VND21 billion allocated from the state coffers, only VND13 or 14 billion was actually used for film production, and a mere VND50 milion ($2,353) on film promotion.

The rest of the sum was spent covering other expenses, Van added.

State-funded films in general, and historical flicks in particular, are typically weak when it comes to publicity, and do not earmark enough money for the task.

There is little to no information regarding “My Nhan” (Beauties), another state-funded historical film which began shooting earlier this week, available on the Internet.

The producer could have made the most out of its appealing history-based plot and star-studded cast for promotion.

The film has also struggled hard at local cinemas since its debut earlier this year.

The film, the country’s first digital feature on marine police, was also screened once for free.

Meanwhile, local private companies spend millions, or even billions, of dong (VND1 billion ~ $47,000) on publicity for their films.

A poorly-acclaimed film like “Mat Xac,” (The Missing Corpse) by Vietnamese director Do Thanh An, which was inspired by a real story of a cosmetic surgeon’s dumping his client’s body into a river in Hanoi, fared better than expected at the box office thanks to efficient promotion.

The producer of “Nuoc” (2030) by Vietnamese-American director Nguyen Vo Nghiem Minh, which has screened at several international festivals, now plans to spend VND500 million ($23,534) on advertising.

In comparison, huge sums have been used to promote historical blockbusters from Hollywood, China, and South Korea.

According to Hankyoreh newswire, the producers of Korean docudrama “Roaring Currents” earmarked some $2.9 million out of its total cost of $18.6 million for publicity campaigns.

Also, with efficient promotion months before its launch in September 2009, “The Founding of a Republic,” a Chinese historical film with a pure message of commemorating the 60th anniversary of the People’s Republic of China, was a resounding success.

Vietnamese historical films are thus both outnumbered and outperformed by foreign historical blockbusters.

According to film critics, most local directors of historical films are too intent on their propagandistic messages, and thus lack the creativity to make the most out of the country’s rich history.

Local historical films usually have predictable endings and lack authenticity, as they usually feature the enemy as feeble and humble compared to Vietnamese forces.

On the contrary, Hollywood, Chinese or Korean historical films, such as the recently launched Korean film “The Admiral,” generally portray their enemies as mighty troops, and thus pack their films with realistic, exciting battle scenes.

Vietnamese directors also stick rigidly to historical details to make their films historically precise, at the loss of appeal and excitement, particularly to young audiences.

Three films, “Hoa Ban Do” (The Red Flowers), “Ky Uc Dien Bien” (Memories of Dien Bien), and “Song Cung Lich Su,” dwell on cliche details during wartime when depicting the Dien Bien Phu battle, therefore making them less captivating than they should be.