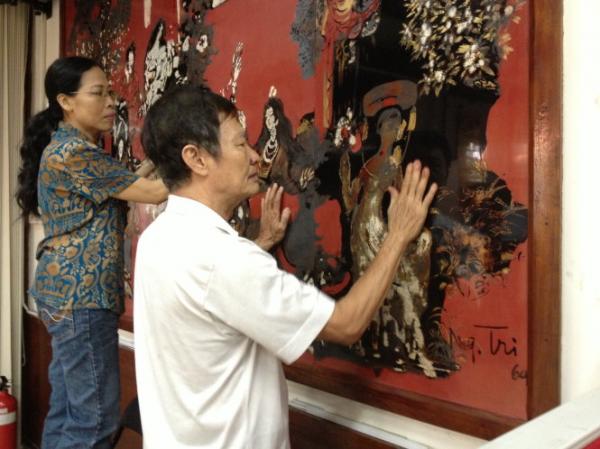 Artist Nguyen Lam, a great admirer of Tri’s work, had never dreamed of being tasked with restoring the late artist’s internationally-famous masterpieces.

Lam considered the task, though daunting and technically demanding – yet poorly paid – a huge honor bestowed on him.

The works by Tri (1908-1993) – the pioneer of Vietnamese lacquer paintings – have been recognized as national treasures, and are forbidden from being brought out of the country.

Prior to September 2013, one of Tri’s untitled paintings, which was created in 1939 and is owned by the French Consulate General in Ho Chi Minh City, had sustained considerable damage – such as color fading and peeling – and was in dire need of a revamp.

The 3 x 1.8m painting comprises nine smaller lacquer paintings and depicts folk images.   The French consulate planned to restore it a long time ago, but could not find a suitable artist, even among French, Japanese, and local experts.

On the recommendation of French artist Remy Jullien, Nguyen Lam was chosen by the French consulate thanks to his superb artistic skills and 50 years of experience working with lacquer.

Lam had to meet the consulate’s stringent requirements, including not taking the painting out of the consulate and not revealing its details or real dimensions.

He and his children, who are also artists, worked every day during three months to complete the restoration.

The artist noted that unlike Western oil paintings, on which restoration begins from the outside in, Vietnamese lacquer paintings must be worked on from the inside out.

“If the restoration team isn’t highly skilled or doesn’t understand the original painting thoroughly, further damage and straying from the original colors and features are inevitable,” Lam shared.

“I did thorough research and only accepted the restoration offers once I felt that I’m fully capable of completing the task,” the 73-year-old artist added.

Lam’s successful restoration of Tri’s painting caused quite a stir among the local artistic circle.

They best summarize the growth of lacquer works in Vietnam during the 20th century.

Two of them fetched around one million dong back then, which was equal to the value of a winning national lottery ticket and was enough to buy a villa at that time, Lam added.

The purchase of the paintings in 1967 accounted for about one percent of the amount allotted for the library’s construction.

Bui Xuan Duc, the library’s director, said that he turned to Australian experts for help, but they declined, as they were not familiar with Vietnamese lacquer.

He also asked several experts in Hanoi, but his library was not able to satisfy their demands, including taking the paintings to Hanoi and exorbitant restoration fees, which would amount to 10-20 percent of the paintings’ current monetary value.

Duc then turned to Lam after learning that his restoration of the painting at the French Consulate General had been a huge success.

Eugene Tan, director of the Singaporean gallery, visited Duc’s library twice, both before and after the restoration of the three paintings.

“Though they already have one of Tri’s works, they’re really interested in our paintings, and expressed wishes to borrow them for their grand exhibit next year,” Duc added.

Though the Singaporean gallery director was well aware that Tri’s masterpieces are national treasures and cannot be removed from the country, he said he would go to great lengths to obtain permission from the Vietnamese government to do so, Duc said.

Nguyen Lam’s successful restoration of the paintings paves the way for potential revamps of more of Tri’s deteriorating paintings, which were created between 1930 and 1940, such as “Giang Sinh” (Christmas), and “Ben Dam Sen” (By the Lotus Lake), according to local experts.