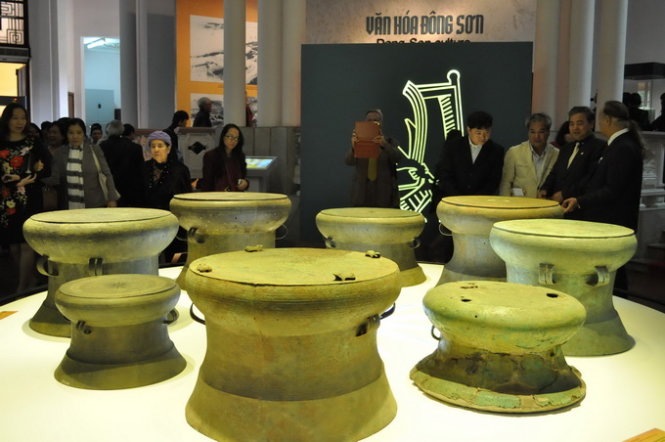 An exhibit opening on Tuesday in Hanoi showcases nearly 300 artifacts, which are the fruits of a 90-year painstaking research on the Dong Son era of ancient Vietnam, dated around 1,000 B.C. to A.D. 100.

The exhibit, which is the collaboration between the museum and its counterparts in Hanoi and several northern provinces, showcases around 270 artifacts of the ancient Dong Son residents.

The exhibits marks the 90th anniversary of  painstaking, comprehensive research and collection on the era, which kick-started in 1924.

The exhibit’s main highlight are Dong Son bronze drums- the Dong Son Culture’s signature artifacts and one of the country’s prized cultural icons, which are indicative of the zenith in ancient Vietnamese people’s bronze casting techniques.

Also on display are century-old drums from other localities, working tools, everyday items, weaponry, musical instruments, and ornaments typical of the Dong Son culture, as well as products from its exchanges with other cultures.

A seminar held on Tuesday also saw scientists and archeologists from related institutes and associations discussing the Dong Son era and its rich culture in depth. The exhibit is running until April 2015.

Centered at the Red River Valley in northern Vietnam, the Dong Son culture thrived robustly some 2,000-3,000 years ago.

The culture is of momentous significance to the country’s overall culture and its impact was also felt in other parts of Southeast Asia.

The Dong Son bronze drums, one of the country’s cultural icons, are typically adorned with a sun in the center and engraved with decorative patterns.

The drums were initially created as musical instruments, but were later used as a medium of trade or currency and were also considered objects of worship.

The body of the items is also engraved with images which reflect ancient Vietnamese people’s lifestyle, such as dancing, playing musical instruments and boarding ships.

A local fisherman stumbled upon a number of bronze artifacts in Dong Son Village in northern Thanh Hoa Province in 1924.

The fisherman’s chance discovery was then followed by a French official’s diggings, and Vietnamese experts and archeologists’ comprehensive research and excavations.