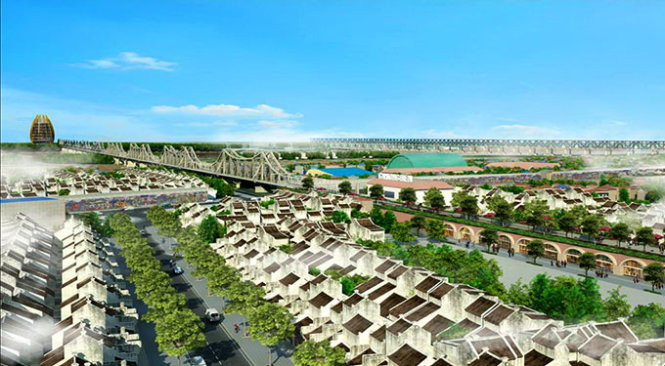 Experts were divided on Wednesday at a symposium on how to renovate a century-old bridge in Hanoi in respect to its crucial transport function and suggestions to turn it into a museum and pedestrian bridge to promote green traffic.

The seminar, organized by the Vietnam Planning and Urban Development Association, discussed plans to revamp Long Bien Bridge – one of the capital’s cultural icons and historical witnesses. The symposium was attended by several architects, construction experts, and urban planners.

Nguyen Nga, an architect, presented her approach of turning the bridge into a museum for the sake of green traffic.

Nga is the board chair of the Long Bien Bridge Consultancy, Investment and Development Co., and head representative in Vietnam of Eiffage TP – a French construction company.

Under Nga’s plan, nine original bridge spans would be restored, with their shape and style perfectly retained.

The spans would be where two steam locomotives are to be displayed, she added.

Meanwhile, 10 new spans would be built in place of those devastated by the war, the seminar was told.

Mirrors would be hung over the new spans, turning the historically-rich bridge into a gallery and museum which reflect memories of the 20th century, Nga stressed.

Her plan also sees different components of the bridge being turned into a hanging garden and a traditional craft village.

However, Nga’s proposal met with objections from the participants.

Dao Ngoc Nghiem, an architect who is the vice chair of the Vietnam Planning and Urban Development Association, stressed the restoration of the bridge needs to strictly adhere to its original design, and the most viable restoration approach for the time being should be consolidating to enhance its strength and lifespan.

“It’s undeniable that development and restoration should go hand in hand. However, I think we shouldn’t put undue stress on the bridge’s historical and cultural values. Hanoi is also home to many other urban heritages,” he said.

Nghiem dismissed Nga’s plan of turning the bridge into a pedestrian and art bridge as unnecessary, underlining that the bridge’s principal function is facilitating road transport.

To Anh Tuan, former director of the capital’s Department of Planning, said turning the bridge and surrounding areas into a museum and art space would mean eliminating its transport function.

He then urged that the issue of how the elimination would affect the city’s traffic situation be taken into consideration.

“Green traffic sounds great and is compatible with the current global trend. However, green traffic on the bridge alone amidst the dusty, smoky city doesn’t mean much in reality. More importantly, the green traffic axis would disrupt one of the city’s traffic arteries, thus aggravating the current, already complicated traffic situation,” Tuan elaborated. In March 2014, Prime Minister Nguyen Tan Dung requested that ministries and agencies maintain the Long Bien Bridge.

The Prime Minister’s request came as a response to controversy that was raised after the Ministry of Transport earlier announced plans to build the Yen Vien-Ngoc Hoi urban railway route to handle the increasing demand for transportation.

The Long Bien Bridge was located in this proposed railway.

The Prime Minister asked related agencies to discuss better plans to construct a new bridge at the most reasonable location and not to consider dismantling the old bridge.

The 2.5-km cantilever Long Bien Bridge, spanning the Red River, was built from 1899 to 1902 and designed by French architect Gustave Eiffel, who is designer of the Eiffel Tower. The bridge was opened in 1903.

The bridge was once called Doumer, after Paul Doumer, the Governor General of French Indochina and later the French President.

At that time, it was one of the longest bridges in Asia with a length of 1,682 meters.