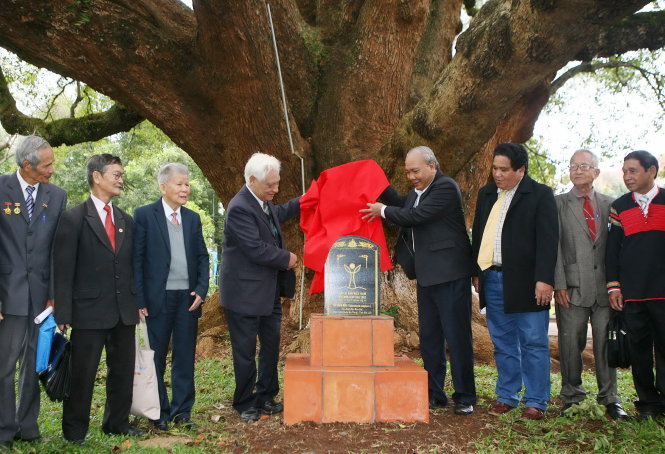 A pair of century-old camphor trees planted by Vietnam’s last king at his mansion in the central region has been honored as heritage trees for their biological diversity and historical value.

The Vietnam Association for Conservation of Nature and Environment (VACNE) on Wednesday handed over a heritage certificate and erected a recognition stele at the Bao Dai Edifice in Buon Ma Thuot City – the capital of Dak Lak Province in the Central Highlands.

Bao Dai, the country’s last king, planted two camphor trees, which are over 100 years old, symmetrically at his mansion’s gateway around 1930.

Each is nearly 30 meters tall and measures around 2.5 meters in diameter, according to Dr. Nguyen Ngoc Sinh, VACNE chair.

Their lush, wide foliage provides ample leafy shade and grandeur for the edifice, he added.

According to Wikipedia, camphor trees, scientifically known as Cinnamomum camphora, are a large evergreen tree that can grow up to 20–30 meters (66–98 ft) tall.

Its leaves have a glossy, waxy appearance and smell of camphor when crushed.

The trees, which belong to a rare species, are also of great biological value, as they were transferred from another place and grew in natural conditions, according to Y Dham Enuol, vice chair of the provincial People’s Committee.

The pair also serves as historical witnesses and a spiritual hallmark of the ethnic minority communities who are scattered throughout the province.

He then returned to France to resume his studies and did not officially begin his reign until 1932.

The king handed over his reign’s sword of power and seal to a Vietnamese revolutionary delegation at 1:00 pm on August 30, 1945.

Witnessed by some 60,000 locals who packed the Hue Royal Palace, King Bao Dai, in his royal costume, surrendered and gave up his power unconditionally.

After several more political activities following his abdication, at 40, he started living in exile in France until passing away in Paris in 1997.