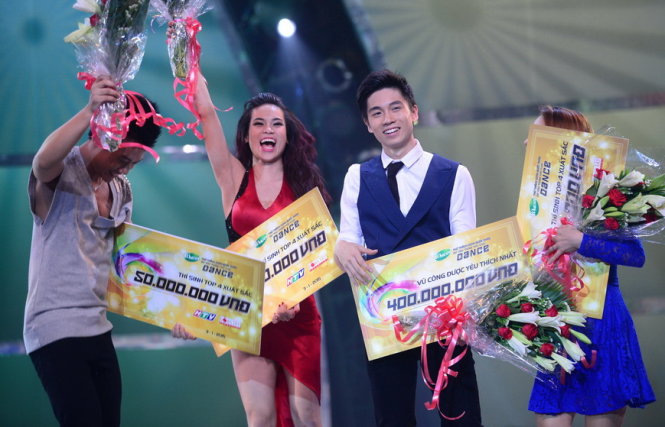 A 19-year-old man was named winner of the third local version of the U.S. dance show “So You Think You Can Dance” in its finale on Saturday night.

Son Lam earned 35,45% of the audiences’ vote and was announced the winner at the end of the show’s finale, which took place at Ho Chi Minh City’s Maximark Cong Hoa Stadium.

The young man, who hails from the northern province of Thanh Hoa, was repeatedly voted as the favorite dancer in the previous live shows.

The final night also saw the 2014 show’s 20 most impressive performances and awesome pairing of this year’s Top 4 with the winners and runner-ups of the two previous seasons    in electrifying dances.

Dinh Loc, runner-up of the second season, unexpectedly proposed to Xuan Thao, one of this year’s Top 4, after the couple gave a rousing jazz performance.

Thao was moved to tears while audiences in the stadium gave the couple a standing ovation.

A program summarizing the six-month third season’s dance routines and contestants’ efforts will air on Sunday night on HCMC Television channel HTV7 and some other channels.