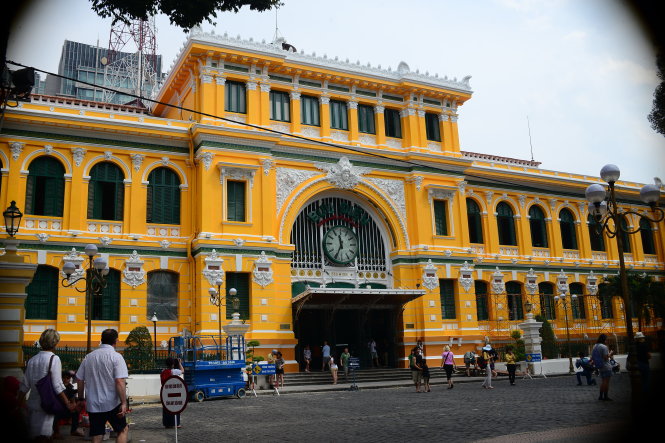 Architects and artists in Vietnam have frowned on the overly bright new paint job on the Saigon Central Post Office, one of Ho Chi Minh City’s most prominent icons and tourist attractions.

The new coating is part of a major ongoing facelift at the Saigon Central Post Office, located at No. 2 Cong Xa Paris Street in District 1.

The 123-year-old edifice, which is of immense historical and cultural value and is now one of the city’s major tourist attractions, is a stone’s throw from the Saigon Notre-Dame Cathedral, another signature structure in the downtown area.

This is the first time the building, which was constructed by a French company in 1891 and is rich in French architecture elements, has undergone a major restoration process in nearly 40 years.

The facelift mostly consists of applying a new layer of paint with a brighter shade of yellow and a coating of nanomaterials, as well as making repairs to the roof and walls which have been dripping and scaling over years of use.

The nanomaterial coating, to be applied over the water paint, can enhance the durability and luster of the paint layer by another 10 years without affecting the iconic edifice in any aspect, Nguyen Duy, executive director of Kova Paint Group, a local paint and waterproofing manufacturer, which offered the coating for free, told Tuoi Tre (Youth) newspaper.

However, the building’s bright new shade of yellow has drawn ire among the public and local architects and artists over the past few days.

Several veteran local architects and artists consider the new look of the Saigon Central Post Office an uncalculated treatment on the century-old mansion.

They are of the opinion that the new shade of yellow is overly bright and intense for such an old, French-style edifice.

According to seasoned artist Uyen Huy, chair of the Ho Chi Minh City Fine Arts Association, French architects and builders always take the colors and shades of the paints to be used into careful consideration when it comes to the construction of momentous structures, to make sure the new paints are not gaudy and are congruous and tasteful.

He added the edifice’s original color was an earthen yellow with white and black tints, which made the color tasteful and moderately bright.

Representatives of the Ho Chi Minh City Post earlier said that the new paint will fade to the original color after being in use for some time and being exposed to the elements.

They also stressed that the new shade of yellow is the industry’s signature color.

The tasteful light yellow of the Saigon Central Post Office is pictured in this 2004 file photo. Photo: Tuoi Tre

However, several experts find that such 'excuses' are feeble and totally unacceptable, and just add fuel to the fire.

Lam Quang Noi, a sculptor who has dozens of years’ experience in restoration projects, asserted the new paint will only fade with time and exposure to climatic conditions but it can by no means darken into the edifice’s original color.

Architect Nguyen Truong Luu, vice chair of the Ho Chi Minh City Association of Architects, said that all his colleagues have voiced their disapproval of the Saigon Central Post Office’s new paint color.

“The excessively bright shade of yellow has nothing to do whatsoever with the long-standing mansion’s architectural features and is absolutely not what people would imagine about a century-old French-architecture edifice,” Luu elaborated.

Lime, which inherently does not have sheen, adds to the age-old edifices’ weather-beaten, solemn look, he analyzed.

The architect said the investor of the Saigon Central Post Office’s restoration project should have ordered a special paint, instead of the glossy bright paints which are intended for modern buildings only.

He also refuted excuses claiming that the Saigon Central Post Office is not a relic and its owner can thus revamp it at their own will.

Moreover, the edifice is supposed to go well with its environs in the downtown area, particularly the Saigon Notre-Dame Cathedral in the vicinity.

Luu cited the construction of buildings in the downtown area such as the Saigon Metropolitan Tower and Diamond Plaza in 1995 and 1999 respectively, in which the city’s Chief Architect Council demanded their architectural features and colors be not out of place with the surroundings and part of the former edifices be retained.

The Saigon Central Post Office was selected in 2010 to be among those structures on which dossiers for recognition as national relics are to be prepared, Luu pointed out.

The mansion also ranked 20th on a list of the city’s structures to be preserved in 1996.

Nguyen Thi Hau, secretary general of the Ho Chi Minh City Association of Historical Science, said she was shocked at the new paint, as it is a far cry from the original one, which went perfectly well with the elegant green windows and tasteful white lines.

The Saigon Central Post Office is not among the buildlings which need restoration, she added, noting that the edifice is another of the city's century-old structures which have lost their original charms and looks to facelifts.

Meanwhile, Le Kiem Hoa, an official of the Ho Chi Minh City Post, confirmed that the facelift is merely to restore the original shade, not to 'invent' a new one.

“Over the course of more than 120 years, the edifice’s original yellow shade has turned into a pinkish yellow. Local residents and experts will get used to the new shade after a while,” Hoa added.

Hoa noted that the post industry considers the edifice a key structure and thus made sure the revamp is conducted properly.

The construction unit is a professional company which scaled off the original paint layers for thorough analysis before deciding on the most suitable shade, he stressed.

The new paint is only part of the facelift, which also involves other repairs.

The edifice was built in 1891 by a French construction company, which sent a notification on the building’s 100th birthday in 1991 that its warranty had expired.

The edifice has not seen a major facelift since 1891, Hoa added.

The restoration work, which began in late August last year, is expected to be completed in time for the Lunar New Year celebration in February.

Working and opening hours remain unchanged at the building during the revamp.

A café has recently opened to the right of the edifice to cater to visitors.