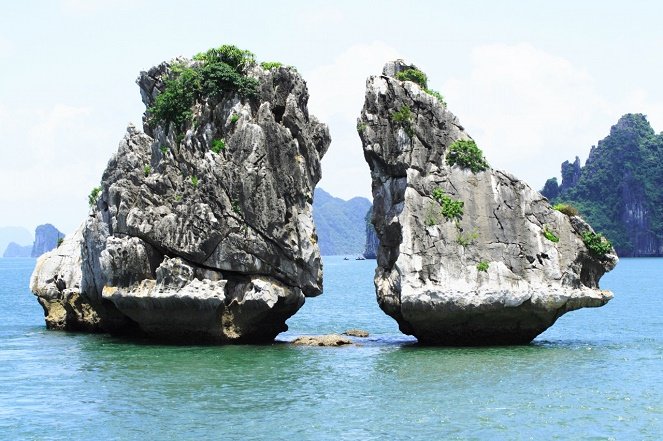 Authorities of a northern Vietnamese province, which is home to UNESCO-recognized Ha Long Bay, proposed on Monday that the heritage’s peripheral areas be reduced for better management.

Nguyen Van Doc, chair of the People’s Committee of Quang Ninh Province, expressed the proposition at a meeting on Monday, the Ministry of Culture, Sports, and Tourism reported on its website on Wednesday.

He added the zoning of the site’s peripheral areas was conducted over 10 years ago, before the province’s capital city of Ha Long experienced robust economic and tourism growth.

The current peripheral areas include the area around Cat Ba Bay in neighboring Hai Phong City and the area spanning from National Highway 18 to Hon Gai District, also in Quang Ninh Province, which is home to several urban and tourist construction projects as well as bustling mining activity.

Tuan Chau Corp., a local conglomerate late last week petitioned the provincial People’s Committee to allow it to pour over 20 million cubic meters of soil, rock, mud, and sand into Ha Long Bay, according to Pham Thuy Duong, head of the bay’s Management Board.

The pouring is intended to reclaim 400 hectares of the water surface to the west of Tuan Chau Island, located in Ha Long Bay’s peripheral areas, to make room for the group’s construction of three villas.

Duong told Tuoi Tre (Youth) late last week that the group had repeatedly filed the petition, which was all turned down.

“Both the provincial People’s Committee and the heritage site’s management strongly object to the group’s suggested pouring. UNESCO has warned us regarding this and is likely to do the same this time,” she noted.   A provincial official in September 2014 said the province was looking to build a cable line through Ha Long Bay this year.

The suggestion has met with vehement objections, with critics saying that the construction will adversely impact the heritage site.

With such rife risks of intrusion, the management of Ha Long Bay’s peripheral areas remains inadequate and even unfeasible in certain areas, Quang Ninh chairman Doc told the Monday meeting.

Relevant provincial agencies will thus take into consideration the possibility of removing certain areas with great economic and tourist growth from the periphery to properly manage the remaining features.

The proposed changes will be reported to UNESCO for approval, Doc added.

The chairman stressed more efforts be made to safeguard the world heritage site’s core area, which spans around 430 square kilometers.

Ha Long Bay includes some 1,600 islands and islets which form a spectacular seascape of limestone pillars, UNESCO says on its website.

Thanks to their precipitous nature, most of the islands remain uninhabited and well cushioned from human intervention.

The site’s exceptional scenic beauty is complemented by its great biological interest.