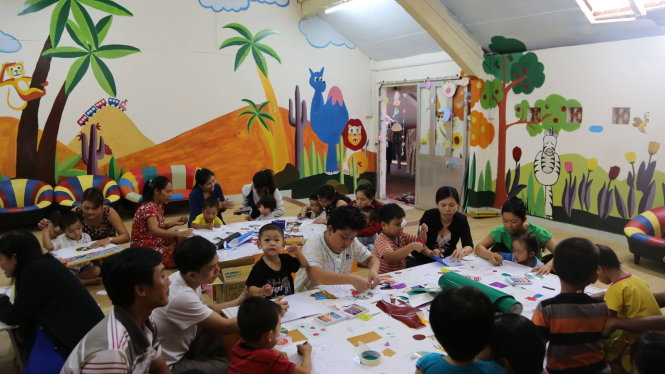 A group of artists have launched a project in a Ho Chi Minh City hospital to engage kids with ophthalmological defects and diseases in a fun-packed, pain-free world.

Based in the city, the group, whose core members are artists Phan Thao Nguyen and Truong Cong Tung and curator/writer Arlette Quynh-Anh Tran, works between visual arts, social and life sciences in order to produce alternative non-formal knowledge via artistic and cultural activities within the Vietnamese context, they wrote on their website.

The project began in July last year and has received assistance from San Art – a popular art destination for both locals and expats in the southern hub, and a patient-friendly paint brand.

It is also patronized by the Amsterdam-based Prince Claus Fund, which seeks cultural collaborations in places where resources and opportunities for cultural, creative research, and production are limited and cultural heritage is threatened.

Under the project, the hospital’s pediatrics department has seen visually striking coatings applied to its floors, walls, patient rooms, and furniture.

The group members also organized free painting classes for the child patients within the first three months of the project.

The kids’ discomfort, pain and eye patches could not hold them back from indulging in a world of eye-catching colors, images and imagination.

The class yielded dozens of paintings created by the kids.

Some of them were combined with others to make murals, while the remainder were printed and hung on the walls.

The artists also attended sessions held by the hospital’s doctors in which they learned basic ophthalmological knowledge to better understand the children’s aesthetic appreciation power.

The paintings and murals the artists created describe how the eyes receive images and the brain analyzes them to form different visualizations and perceptions.

The eye-catching, richly-colored paintings, particularly those in the rooms where the kids have their dressings changed, relieve them of pain and fear and muffle their cries with laughter.